Beware, sheep rustlers of the South West of England! Police drone spy unit gets to work 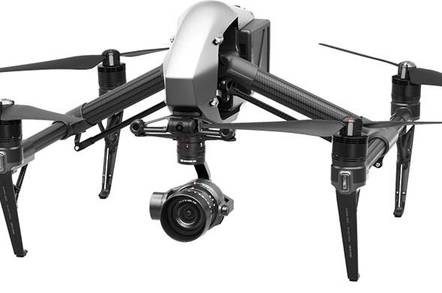 A DJI Inspire 2, a slightly newer model of what D&C Police's drone squad is using

The flying spy team was first established two years ago on a trial basis and has now been made a permanent unit within D&C Police. Its remit is to provide the same sort of aerial surveillance that the force helicopter provided but at a cheaper cost.

The squad is equipped with six DJI Inspire 1 drones fitted with HD zoom cameras capable of beaming thermal imaging data back to ground-based cops. Its operators are all trained to Civil Aviation Authority standards.

D&C Police hopes to have 40 trained operators and 18 drones on strength by the start of 2018, according to the BBC.

Each of the unmanned aerial vehicles costs around £2,000 each, according to the police.

"Drones will aid officers as part of missing person searches; crime scene photography; responding to major road traffic collisions; coastal and woodland searches and to combat wildlife crime,” said Chief Superintendent Jim Nye, who is responsible for the drone squad, in a canned statement. “Drones can even help police track and monitor suspects during a firearm or terrorist incident, as it will allow officers to gain vital information, quickly, safely, and allow us to respond effectively at the scene."

Sky News quoted privacy lawyer Charlotte Harris asking, rhetorically: “How many individuals who aren't part of an investigation will be affected by this?”

The answer, inevitably, will be “lots”. Police forces in general are delighted at the explosion in surveillance capabilities that modern technology affords them, adopting the “snoop on them all, the courts can sort the innocent from the guilty later” approach. Legal controls on police use of images, including those gathered from drones, are so weak and poorly enforced as to be meaningless in practice.

For example, while the High Court ruled in 2012 that the Metropolitan Police’s policy of never deleting anything from its ever-enlarging custody mugshot database was illegal, the capital’s finest just blew a raspberry at Lord Justice Richards and ignored him – with the Home Office happily egging them on over a period of years and even making excuses for police defiance of the court.

This is not to suggest that Devon and Cornwall Police takes the same cavalier attitude towards obeying the law that their colleagues in the Big Smoke do. A force press release from 2015 reveals the sort of everyday images and video that their drones collect, while carefully omitting any zoomed-in or thermal images of the sort that would infringe the privacy of the innocent.

Sussex Police also has a drone unit, complete with a commendably clear Q&A page on what they are, what kit is fitted to them, how they are used and a privacy impact assessment. The force has, it says, worked with the Surveillance Commissioner in developing its policy and processes for using drones and footage obtained from them. ®