Don't panic, but your Bitcoins may just vanish into the ether next month

Well, actually, do panic. A pending code change could bring a period of instability 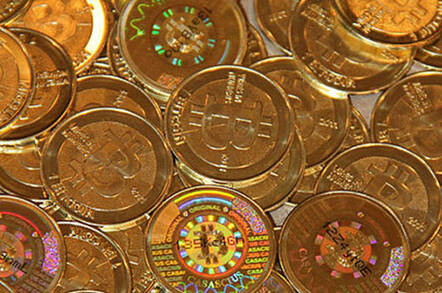 The community-driven organization overseeing Bitcoin on Wednesday warned that any Bitcoins received after Monday, July 31, 2017 at GMT-0700 may vanish into thin air or be rejected as invalid.

Bitcoin.org said that at the end of the month, Bitcoin confirmation scores – a number that represents the difficulty of altering the associated transaction – may become unreliable for an unknown period.

"This means that any Bitcoins you receive after that time may later disappear from your wallet or be a type of Bitcoin that other people will not accept as payment," the group said.

The reason for this "potential network disruption" is Bitcoin Improvement Proposal 148 (BIP 148), which describes a "user-activated soft fork" (UASF). It's an effort to implement a code revision referred to as a Segregated Witness, or SegWit, a method for separating signature data from transaction identifier data in a Bitcoin transaction.

Doing so offers a number of ostensible benefits, including increasing the Bitcoin blocksize, limiting the extent to which transaction data can be modified by third parties, and simplifying scripting upgrades.

The SegWit operation depends on the consensus of Bitcoin miners. If a majority of the Bitcoin miners signal their support through their mining activity, the change should become active across all compatible Bitcoin clients.

But if BIP 148 is only embraced by a minority, the blockchain could split. That would create a situation where BIP 148 Bitcoins and legacy Bitcoins would be incompatible.

In an email to The Register, Bitcoin contributor Dave Harding explained, "The development team for SegWit, called Bitcoin Core, released it in late October 2015 with an activation method used for a previous successful Bitcoin upgrade. The method required Bitcoin miners signal that they support SegWit; when 95 per cent of mining capacity signaled their support within any of 26 scheduled two-week periods, SegWit would activate."

Miner activation of Bitcoin upgrades is not mandatory, said Harding, but it's less disruptive that way.

Since then, only about 35 per cent of miners have signaled support for the change. Harding believes he knows why, but hesitated to speculate.

"After several months of SegWit stuck at 35 per cent, someone proposed we use a different activation method for SegWit – one that didn't rely on miners," Harding said. "They called their method a 'User Activated Soft Fork (UASF)' and pointed to a number of historic occasions where similar mechanisms were used to upgrade Bitcoin from 2009 to 2012."

Harding describes UASF as a boycott on steroids. "Starting at a particular time (or other signal), a group of users boycotts any mining done by miners who haven't upgraded," he said. "By itself that would probably be ineffective, as most boycotts are, but the design of Bitcoin means that if you boycott a miner you also boycott everyone else who uses that miner or anything derived from that miner."

That's what's happening at the end of the month. As a consequence, everyone will be forced to join the boycotters or to exclude them.

Harding said that if everyone accepts the proposal or if everyone rejects it, there would be no issue.

"Unfortunately neither of those happened," he said. "There's a moderate amount of vocal support for the UASF among Bitcoin's most active users on social media, but it's not overwhelming support. That means when the UASF starts on August 1st, we have to wait and see whether or not the people who say they support the UASF actually put their money where their mouth is and refuse to accept Bitcoins from any boycotted miner or anyone associated with that miner."

And for those who haven't chosen a side, there's uncertainty about which kind of Bitcoin will be valid.

Harding stressed that Bitcoin marked as confirmed in a wallet prior to the start of the event will be safe. It's the Bitcoins passing back and forth afterwards that are at issue.

"It's a rather awful situation," said Harding. "Unfortunately the only advice we can give to users is in the notice, which is to stop using Bitcoin on July 31st until we know whether or not the UASF succeeded."

To further complicate matters, there's another such proposal known as "SegWit2" planned for November.

Bitcoin.org is warning of the possibility of price fluctuations. It advises Bitcoin users to:

Among those in the Bitcoin community, there's doubt about whether this alert is being handled in a responsible manner, because a blockchain split is considered unlikely.

"If this alert is too stark ... it risks spreading a lot of FUD and panic selling before August 1st that could wipe billions off Bitcoin's market cap and who knows how much out of people's pockets," observed Will Binns, a Bitcoin.org maintainer, in a discussion on GitHub's Bitcoin repo.

A research note issued by Morgan Stanley analysts on Wednesday may do more damage. It advised spending bitcoins rather than saving them because "Bitcoin acceptance is virtually zero and shrinking." ®