AI vans are real – but they'll make us suck at driving, warn boffins 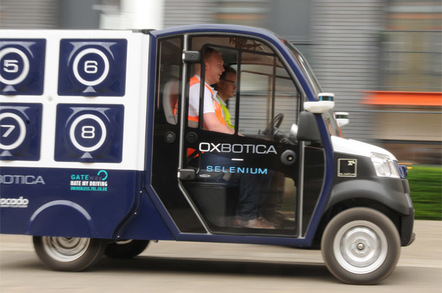 Tech and automotive firms are pushing driverless car technology on society, rather than there being a big demand for it, in the opinion of the Transport Research Laboratory's boffins.

In a whitepaper published today TRL's Fellows opined that not only is there a "strong technology push for autonomous vehicles" but also that "the potential benefits will only be delivered if ... society accepts and adopts automated vehicles."

"Re-engineering infrastructure for [autonomous vehicle sensor systems] rather than human drivers could optimise its use. For example, some Fellows posed the question as to how junctions should be redesigned," said the whitepaper's authors.

They acknowledged AI has its part to play, while warning that "with greater degrees of autonomy, the role of the driver will change", especially when "drivers are reduced to becoming part-time operators of vehicles". This is already a serious concern in commercial aviation, where autopilot tech has advanced to the stage where, in clear weather and undisrupted skies, onboard computers can fly an airliner from takeoff to landing without needing manual intervention.

Operator and pilot trade unions alike worry that over-reliance on ever more competent autopilots is contributing to skill fade and loss of situational awareness at key stages of flight. The same could become true on the roads, say the TRL Fellows, who highlighted how "automation of the driving task ... will cause drivers to lose essential skills on which they depend".

"To lessen the risk to all road users, the government may need to update the driving test in response to new technology and driver skill requirements," they added.

Current British driverless car tech, such as the Selenium software developed by Oxford University startup spinout Oxbotica, relies on LIDAR and AI to both map and "learn" a fixed, repeated route; an Oxbotica rep told The Register at a demonstration event last month that its software learns the route, as driven once by a human driver, and then refreshes its memory every time it drives itself around that route – and it doesn't rely on GPS or other traditional external navigation sources. Neither, we were told, does it read road signs.

The software is written in C/C++ and the Ocado-backed electric van your correspondent saw at the demo runs it on an Ubuntu PC with a 12-core Intel Xeon CPU.

Selenium is currently deployed in one of the UK's highest profile driverless car trials in Woolwich, southeast London, under the banner of TRL's Gateway project. This consists of an autonomous electric van delivering groceries to residents; the idea is to test public reaction to the vehicle and see what needs improving. The van (which is closer to a milk float than a Ford Transit) is manned at all times by a human operator, as much for taking over in an emergency as to protect the vehicle against cheeky locals trying to interfere with it.

TRL's Fellows consist of academics and folk from "transport-related organisations" with a professional interest in future transport technology and developments. ®

Fancy sitting in a Level 4 driverless car roaming London? Get in line

Latest trials will expose capital to delights of robot chauffeuring

Londoners will be trialling driverless cars in pedestrianised area

What's a squashed jogger or two in the name of progress?

Q: How do you test future driverless car tech? A: Slurp a ton of real-world driving data

'Driverless' lorry platoons will soon be on a motorway near you

Strap yourself in, fasten your helmet, and try out FreeNAS 11.0-RC

It's supposed to end in tears. Then you can file a bug report

From alchemy to brain-hacking: How to be better, forever

Reg Lectures Anders Sandberg tackles transhumanism for the rest of us

Autonomous driving in a city? We're '95% of the way there'

Goal is 'Level 5', where vehicle reacts like human-driven one