Hey, remember that monkey selfie copyright drama a few years ago? Get this – It's just hit the US appeals courts 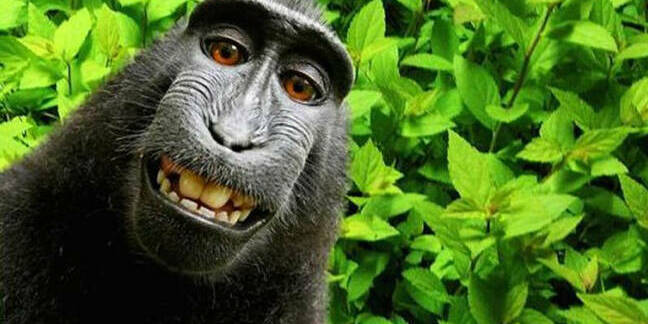 The famous monkey selfie at the heart of the storm (Copyright: David Slater. Or Naruto the monkey. Not sure which)

Analysis Remember that selfie of the grinning monkey way back in 2014?

It was taken by an Indonesian crested macaque named Naruto using the camera of wildlife photographer David Slater. And it is at the heart of a long-running copyright case that's now ended up before the Ninth Circuit Appeals Court in San Francisco.

Why? Because it's not entirely clear who owns the copyright. Is it David Slater – who flew to Indonesia, set up the shot and included the resulting picture in a book of his wildlife images? Or is it Naruto, who actually pressed the button on the camera (although perhaps unwittingly)?

In that sense, the case could decide whether someone other than a human can hold copyright – something that could have significant implications in future as computers use artificial intelligence to capture and create images.

But before we get there, the bigger question is: how did Naruto hear about Slater's book and then hire a lawyer to sue him in California court over breach of copyright? And the answer, of course, is that he didn't.

What happened was that animal rights organization People for the Ethical Treatment of Animals (PETA) sued on Naruto's behalf. Which is patently ridiculous... until, that is, PETA persuaded a woman named Antje Engelhardt to act as Naruto's representative.

Dr Engelhardt studies macaques and has known Naruto since he was born. She joined the case as his "next friend" to give the case some chance of progressing, using a status typically used to provide legal standing for children or people with disabilities. PETA seemingly promised her that if Naruto won the case, he could receive significant royalties – which she hoped would be used to assist the monkeys from the real risk of extinction.

But somewhere along the line and before the appeals court hearing this week in San Francisco, Dr Engelhardt withdrew from the case. It's not entirely clear why, but in a statement explaining her withdrawal she said: "I have always felt that one of my duties as Naruto's Next Friend was to ensure that he/his case does not get exploited for other purposes than getting him the copyright."

Things got even weirder when Engelhardt texted PETA's general counsel Jeff Kerr to tell him she was heading to San Francisco and would drop by his house to have a conversation about what had happened – and Kerr responded by calling the cops on her. She was arrested.

All of which led up to the appeal courts hearing on Wednesday, where one of the three judges right off the bat asked PETA lawyer David Schwartz why PETA felt it has any legal right to represent Naruto at all.

He cited a case stemming from Guantanamo, no less, in which clergymen attempted to act as representatives for those held at the US military base. In the case, the courts decided that "no matter how committed and dedicated" they were, they had to show a "significant relationship" with the plaintiffs to act as their representatives.

The judge said that Engelhardt might have met that standard, but that since she was off the case "for reasons unknown," what significant relationship did PETA have to the monkey living in Indonesia?

Schwartz tried to sidestep the question altogether by arguing that it was in the court's power to ignore that aspect of things and focus instead on whether Naruto had a case, and then deal with a representative later.

Later on in the hearing, the judges asked PETA whether it felt it was entitled to represent any animal in the world whose picture had been taken. Schwartz demurred again, arguing that it would have to be done on a case-by-case basis.

But if it started out badly for PETA, worse was to come when the judges asked Schwartz to explain exactly what injury had been caused to Naruto by the photo being published?

"There's no injury caused by an infringement of the copyright act," Judge Smith noted. "And there's no case that suggests there is."

As Schwartz tried to argue around his point, the judge ended up bellowing at him: "What is the injury? What is the injury?" before pointing out that Naruto – the Indonesian monkey – has "no way to hold money, can suffer no losses to his reputation, there's not even an allegation that copyright could have benefited Naruto."

PETA's Schwartz was left arguing that he didn't have to allege injury at this stage in the legal process.

Let's be honest: any case involving a monkey arguing for royalties on a selfie was going to get a bit weird. But this being the legal system, it was taken entirely seriously, with debates about the language of the Constitution and the Copyright Act and the use of "author" rather than "person."

It started getting a little peculiar in a debate over whether Naruto's "children and grandchildren" should be handed his copyright, were it to be awarded. Then there was the question about whether Naruto was obliged to send letters to the other monkeys in his group letting them know about the court case, since some of them had also been snapped in his pictures.

Next page: Blind to the argument
Page:
Tips and corrections
168 Comments

Once again fails to suck Earth into black hole

Reg readers have not one, but TWO teams in Folding@home top 1,000 as virus-bothering network hits 2.4 exa-FLOPS