'My dream job at Oracle left me homeless!' – A techie's relocation horror tale 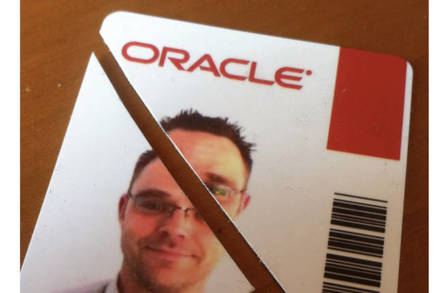 When Bernd Dorfmueller was offered a job in Amsterdam with Oracle, he thought he had lucked into a dream situation that would boost his professional career in IT.

Weeks later, the former network admin was homeless, in debt, and without health insurance.

The experienced techie says his story began back in March when, while living in Barcelona, Spain, he was offered a sales position at Oracle in the Netherlands. The package came with a €12,000 ($13,700) relocation allowance, which our man figured would be more than enough to tide him over until the paychecks on his €60K-a-year ($68,500-a-year) salary began to roll in.

"I flew over to Amsterdam, moved into a guest house for 150 euros a night and started working. Wow, Oracle," Dorfmueller said in his account of events.

"I was proud. I made it into the Olympics of IT, and I was really happy to join the team. I started my new hire checklist and trainings, and all was fine."

Unfortunately for Dorfmueller, however, trouble was brewing. Unbeknownst to him, the relocation package wasn't as useful as he had assumed. First, he says problems with his Dutch bank left him unable to access a chunk of the moving money. Then, crucially, he found out that the money he did have access to could not be used to secure a flat, as he had believed. The agency Oracle employed to handle his relocation cash wouldn't let him spend his allowance on a rental security deposit, we're told.

Making matters worse, according to Dorfmueller, was that he began work in mid-March, smack in the middle of Oracle's pay period. This meant that he wouldn't get his paycheck until the end of April. In the meantime, he was burning relocation money on a room in a guest house.

"Amsterdam is very expensive and a decent flat is minimum 1,000 euros a month rent plus two months' deposit, even if you go outside Amsterdam itself," Dorfmueller said. "So I need 3,000 euros when the 30 guest house days are finished."

Soon Dorfmueller, who is diabetic, had maxed out his credit cards. Absent a "permanent" residence, he was unable to get health insurance to cover the medications needed to manage his condition, or a bank account to receive assistance funds. This, he says, soon led to health complications that forced him to miss time at work and, as he was still probationary, prompted his bosses and Oracle to swing the axe on the new hire.

"When I returned to work I was informed that I will not pass the probation time and that I am fired immediately," he says. "I was just informed. No one from HR or legal actually talked to me directly."

Thus, the man who just weeks before began his dream job was now out of work and homeless in a foreign country.

'Pay the money back'

"Now I am literally screwed and Oracle asks me to pay the money back that the relocation company has spent on a guest house and overpriced hotels, also travel expenses and whatever."

Oracle declined to comment. Folks we know working in Europe tell us the way Big Red dealt with the situation was by and large not outside the norm, and Dorfmueller could have, in hindsight, handled things better on his end. Relocation packages don't always cover things like rental deposits, and sometimes you just need to save up the cash and put that down yourself.

In short, let this techie's tale be a lesson to anyone moving county, state or country for another job: check exactly what you're getting, and what you need.

Dorfmueller says that, if he had it to do all over, he still would have taken the job.

"Hey, I passed the interview, and I can't be that bad," he told The Register.

"Yes, I like the technology and good money, but, aware of the cut-throat environment, I would have started fighting way harder sooner."

The story also has something of a happy ending. Dorfmueller tells us he has landed a full-time gig in Amsterdam with Booking.com. He says it pays less, but is enough for him, and his dog Indy, to get by on.

"OK, I don't work in a high-paid IT job anymore, but that's fine for me, because I decided to say goodbye to the cut-throat environment you find in big IT companies," he said. "I just want to be able to pay my rent, have enough food, walk my dog, then I am fine and I don't have to sell my soul anymore." ®