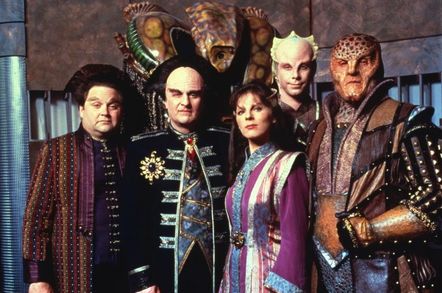 Poll A bloke was arrested after a shouting match with a pal over Star Wars versus Star Trek led to blood being spilled.

Jerome Dewayne Whyte, 23, was collared by Oklahoma police at 6pm on July 1 after he and his roommate argued about the relative merits of the snooty space opera versus the sci-fi merchandizing vehicle turned violent. Whyte has since been charged with assault, possession of marijuana, and having three outstanding warrants.

"I can confirm the incident took place but no, I don't know which one he preferred," Officer Megan Morgan, a spokesperson for the Oklahoma City Police Department, told The Register.

Thankfully, William Shatner has weighed in (no pun intended). In a comment on Reddit he used his deductive powers to blame the entire thing on Star Wars.

"My guess is that both were Star Wars fans. Here's my reasoning: What Star Trek fan carries a pocket knife? and Star Trek fans are nice – they don't go after someone and try to choke them. Choke hold is a Darth Vader move. Therefore it was probably two Star Wars fans arguing over how great Star Trek is," he said, not entirely seriously, one suspects.

According to the police report, the argument between Whyte and his housemate Bradley Burke broke out over which franchise had the better movies. It got so heated that Burke, who is in his late teens, gave up and went to his room, saying: "You're just a trick."

Whyte didn't take that lying down, and, according to the cops, followed Burke into his room, at the Carolyn Williams Center for homeless men, and threw Burke to the floor. The roommate got up and told Whyte, "You wanna replay that?" Whyte decided to make it so, it's claimed, knocking Burke down and jumping on top of him. Whyte put an arm lock around his roomie's neck and then began choking him into unconsciousness, it is alleged. Clearly they both didn't understand that fear leads to anger, anger leads to hate, and that hate leads to suffering.

In this case the roommate, fearing for his life and fading in and out of consciousness, pulled a knife from his bedside table, it's reported. Whyte attempted to grab it and ended up getting cut by the blade, according to the police. At that point Whyte decided that discretion was the better part of valor and retired to his room while the victim dialed 911.

Considering the charges and his outstanding warrants, Whyte may well go where many men have gone before – an American prison. In the meantime, remember folks – they're just films [shut your mouth, normie – ed.] ®

Kepler-90 has same number of planets as our Sun