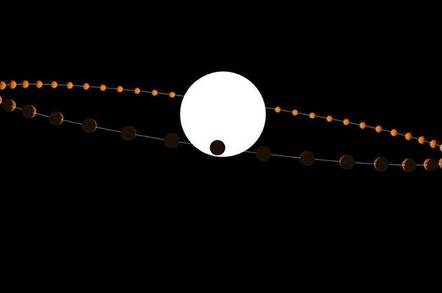 Astronomers have uncovered a potential treasure trove of hot Jupiters, a rare class of exoplanet, in our galaxy.

Hot Jupiters are a type of gas giant. They are physically similar to the Jupiter in our Solar System, and stay close to their parent star, completing their orbits in about a week. It is estimated that only one per cent of Sun-like stars host hot Jupiters.

A hot Jupiter's large mass and close proximity to its star means that it is easy to detect by studying the radial velocity of its star.

The sun and planet orbit around a center of mass, and the gravitational interaction between them causes the star to wobble. Doppler spectroscopy will detect the periodic shift in the star’s radial velocity; when it moves towards Earth, its spectrum is blue-shifted and when it moves away from Earth, its spectrum is red-shifted. The change allows researchers to estimate the gravitational influence and minimum mass of the object orbiting the star.

Sarah Millholland, a graduate research fellow, and Gregory Laughlin, an astronomy professor, both at Yale University in the US, have developed a technique that allows them to narrow down the pool of potential hot Jupiter candidates. And yes, it uses machine learning.

“We use a supervised learning algorithm to detect the reflected light signals of non-transiting planets as they orbit around their host stars. "Non-transiting" means that the planets do not cross in front of their stars from our perspective on Earth,” Millholland told The Register.

Using an intelligent algorithm means that researchers can efficiently comb through piles of data quickly to work out the probability that an exoplanet falls in the hot Jupiter class. Millholland and Laughlin hunted down reflected signals from observations of more than 140,000 stars from the four years of data from NASA’s Kepler mission. The reflected light contains information about the planet’s atmospheres, temperatures and wind patterns.

“The algorithm considers twelve total 'predictors' or 'explanatory variables' that determine how likely a candidate signal is to correspond to the reflected light signal from an orbiting planet. One example of these predictors is a measure of the coherence of the signal, or how constant it stays in its amplitude and phase throughout the four years of available data. Signals like stellar variability will change in amplitude and phase over time because starspots evolve, but a planetary reflected light signal does not evolve significantly over time,” she explained.

To train and test the algorithm, the pair generated synthetic data that mimics what is seen if it is a reflected light signal from hot Jupiter systems. When they applied the algorithm to the data from NASA’s Kepler mission, they found 60 potential hot Jupiters.

Researchers will still need to rely on the radial velocity method to confirm if these candidates are indeed hot Jupiters. The algorithm just aids researchers in deciding what targets are more likely to yield fruitful results.

The results will be published in the Astronomical Journal. You can grab a copy now on Arxiv [PDF].