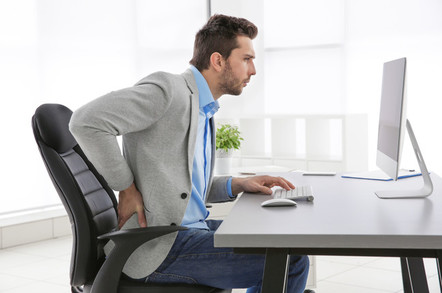 Episode 9 "I wasn't built for user support, I know that now," I sigh.

"I know," the PFY replies, without looking up from his game.

"At one time I thought I could do it but now I know I'm asking too much of myself. I don't like lazy people, stupid people or whiny people."

"I can't stand tinkerers, tweakers, or people who blame technology for their own shortcomings."

"You told me," the PFY responds.

"Told you what?" the Boss asks, drawn over by both the conversation and the opportunity to avoid doing anything fruitful for the next 1/2 hour.

"Not so you'd notice," the PFY replies, "but we've had a bad week for idiots. It must be a full moon, or the idiot planets must all be aligned or something."

"Yes, but you always say that."

"I just sent an email out to all the users in the building saying that because of inherent chromatic aberrations we've implemented a change to toggle the least significant bit of one of the colours in their desktop background and that the change is so small that it will be unnoticeable."

"And what are you demonstrating?"

"Hello Systems?" I say on hands-free.

"It's about the colour update on my desktop."

"All my pictures look funny. I think it's changed all the colours."

"No, it was only the background colour we changed - everything else is the same."

"Well something has changed."

"Yes the background colour. But only by the teeniest amount."

"Well it's affecting my pictures."

"Okay, what's the workstation ID on the front of your machine?"

"Okay, just give me a minute," I say, swinging my chair around to look at the Boss. "I'm just going to back out the change for your machine."

"Working on it now," I say, waving my hands in an abracadabra manner for the Boss. "Okay, can you close the pictures and re-open them?"

"Well that means nothing!" the Boss says. "That could just be.."

"I'm just ringing to see if you can turn off that monitor thing?" the next hands-freer asks.

"The pattern is upsetting my eyes."

"We didn't change the pattern - we just changed one of the colours infinitesimally."

"Yes, well whatever you did is giving me a headache."

"Oh, I see. What was the workstation ID from your machine?"

"Oh, right, just a minute I'll recalibrate the monitor to the normal settings," I say, rolling my eyes at the Boss.

"OK, I've reversed it, but it's an adjustment to the colour temperature so it'll take about five minutes to cool down and 10 minutes to fully stabilise. Turn your monitor off for at least 10 seconds now so the changes are applied."

"So what did you actually change?" the Boss asks, after three more calls.

"I mean originally?" he says.

"Nothing. I changed nothing. I just sent an email out saying I changed something."

"So these problems were already there and your email has just prompted people to recognise them."

"There are no problems, only users."

"Yes but MAYBE there always WAS a problem but people are only realising it now."

"There's no problem," the PFY echoes.

"So why are people ringing?"

"Because they're idiots," I say. "And the worst is yet to come."

"It's almost lunchtime. By the time people have mingled at the cafe and shared their colour change and headache stories there will be a groundswell of unhappy people. Some will go home sick - one may never fully recover. Someone will probably put a piece of polarised glass from a pound shop over their monitor and 10 others will follow suit for a few months until..."

"Some will tilt their screens slightly to compensate for the extra glare," the PFY adds, "while others will need to upgrade their monitor because their current one has been permanently damaged by the change."

"And we will get calls," the PFY says, "many, many calls. The helpdesk will be inundated - in about 35 minutes."

"So email them and tell them it was a hoax!" the Boss says.

"They won't believe that - they'll think it's a cover-up because of the tumours that the chromatic thing has caused."

"There must be tumours, because we're trying to cover it up. Do you want me to send the email cover-up message now?"

"Uh, no. Why not email them and say you've rolled back the change?"

"No, that won't work - people will just think you're lying and the calls will continue."

"Well what do you suggest?"

"Simple, we need to train the helpdesk on what to do."

"First thing - you need to get their workstation ID - and then ask them to repeat part of it so it seems like you're looking it up. Next thing, there needs to be a pause for us to 'roll back the change' followed by some user interaction - they have to DO something which 'makes the change take effect'.

"Switch something on or off, reboot, close an application, change the monitor resolution a couple of times - it doesn't really matter what. Then they feel like something has been done - because we wouldn't get them to do something if we'd done nothing."

"Do you really think people won't see through this?"

"People see what they want to see. We've not even heard from the people with monitor-triggered Seasonal Affective Disorder yet - that's a couple of weeks away."

"You did all that with an email," the Boss sighs. "I can't imagine what happens when you mean a real change."

"Oh we make them all the time," the PFY replies. "We just don't tell anyone."