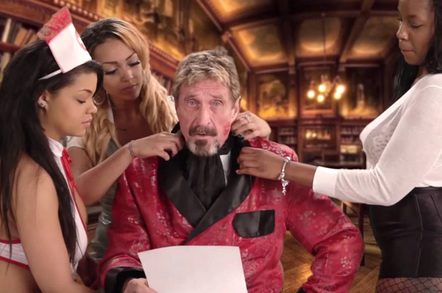 Virus-fighting tech renegade John McAfee has settled his lawsuit in the US with Intel over his own name.

A judge in Manhattan dismissed both the barmy baron's 2016 lawsuit and Intel's countersuit on Wednesday after they announced they had received agreement over how and when McAfee was allowed to use his own name.

The full details of the settlement are not known, but McAfee-the-man has agreed not to use his name or trademark a variation of his name in the cybersecurity field. He may, however, use his name in advertising and promotions.

The legal battle kicked off in 2016 when Intel told McAfee that his plan to rename his cybersecurity company "John McAfee Global Technologies" would infringe [PDF] its "McAfee" trademark.

Back in 1991, McAfee-the-company paid John McAfee $9m for the right to use his McAfee name-brand. Three years later, McAfee-the-man decided to leave the company he had set up and named after himself and effectively go into retirement.

In 2011, Intel then bought McAfee-the-company for $7.7bn, including the 1991 McAfee brand agreement. Three years later, Intel decided to effectively drop the McAfee brand in favor of its own "Intel Security."

Oddly, McAfee himself was partly responsible for damaging his own name-brand, calling the 2013 version of the security suite "the worst software on the planet" in a bizarre NSFW video featuring himself, some strippers, some suspicious nose powder, a handgun, and a PC.

A quick sampling: "Fifteen years ago I had some beautiful software and they took it over. I don't know what they did but it was like that time I hired that Bangkok prostitute to do my taxes while I f**ked my accountant."

Regardless, McAfee may have been surprised when Intel's lawyers descended on him when he considered changing the name of his business to his own name – John McAfee.

And the reason why was because at the same time, Intel was cutting a new deal with private equity firm TPG to sell off a majority stake in its security software arm. As part of that deal, TPG wanted to revert back to the name McAfee.

It was a big deal too: $3.1bn in cash for a controlling 51 per cent stake, with TPG promising to invest a further $1.1bn in equity.

Since then, the fight has been winding through the New York courts with the judge refusing John McAfee's request for an injunction blocking the transfer of McAfee trademark rights to TPG (McAfee was relaunched in April), and McAfee's lawyer arguing that McAfee-the-man never sold off his personal name rights.

In the end, they settled out of court, with neither side admitting wrongdoing. Intel said it was pleased the case was over. ®