Can science crack the cosmos's inexplicable yet bountiful ion? We think it can 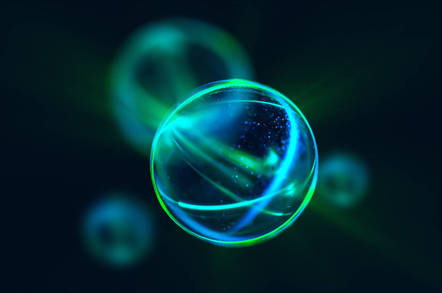 Scientists are getting closer to piecing together the chemical reactions that form trihydrogen, one of the most abundant yet mysterious ions floating around in space.

Trihydrogen, H3+, is an important molecule. It is believed that the tiny ion kickstarted a whole chain of reactions that led to the birth of the first stars in the universe. Exactly how it was formed in the first place throughout the universe isn't known – hence this latest study to work out how the prolific ion came to be.

Since hydrogen is the simplest element, it's not surprising that most molecules in the universe consist of hydrogen in different forms. Trihydrogen – which doesn't occur naturally on Earth – is made of three hydrogen atoms, but instead of sharing three electrons, one is lost, forming a slightly positively charged ion.

Although the end step, where a positive hydrogen ion and a normal hydrogen molecule combine to recreate trihydrogen and a hydrogen atom is well established (H2+ + H2 → H3+ + H), its formation from hydrocarbon compounds is poorly understood

A team of researchers led by Marcos Dantus, professor of chemistry and physics at Michigan State University, tried to recreate the process in a laboratory by firing two powerful lasers at methanol isotopomers, ethylene glycol, and acetone to initiate a reaction.

The energy from the first laser pulse delivers a whopping 1013 watts/cm2 in 35 millionths of a billionth of a second, Dantus told The Register. The second laser pulse measures the progress of the reaction.

They found that the trihydrogen likely occurs via two steps. It requires the extraction of a neutral hydrogen molecule and a proton from the hydrocarbon molecules to create trihydrogen from the reaction above.

The results were published on Wednesday in Scientific Reports. "We found that a roaming H2 molecule is responsible for the chemical reaction, producing H3+; roaming chemistry is extremely new and little is known about it," said Dantus.

'Roaming mechanisms are a budding chapter of chemistry'

Chemists can usually track chemical reactions by studying the fragments of energy released after chemical bonds are broken. But in roaming chemistry, it appears that the bonds are rearranged before the end products are released, making it difficult to study.

"This is the first documented case for a roaming H2 reaction, which is significant because roaming mechanisms are a budding chapter of chemistry – one that may provide explanations for unlikely and unexplained chemical reactions," Dantus added.

The reaction happens at breakneck speed, between 100 and 240 femtoseconds, making it hard to track.

In space, a roaming hydrogen molecule will float around until it finds a lone proton to engulf before evolving into a trihydrogen ion. Essentially, scientists have known about that process for a long while; now they're closer to understanding how the reaction gets to that stage from hydrocarbons. What's weird is that there isn't a load of hydrocarbons out in the yawning void forming trihydrogen, however trihydrogen can be used to form hydrocarbons which can form trihydrogen and so forth, suggesting the process is cyclic.

Or that our universe is a simulation stuck in a recursive infinite loop. Place your bets.

"Although the mechanism for trihydrogen formation in space was elucidated in 1925, not much is known about the different reaction mechanisms and reaction timescales involved with H3+ chemistry in general.

"Given the central role trihydrogen plays in astrochemistry, and the formation of hydrocarbons in the universe, we may be learning about fundamental chemistry that led to the creation of compounds necessary for life. Trihydrogen is everywhere in space," Dantus said. ®