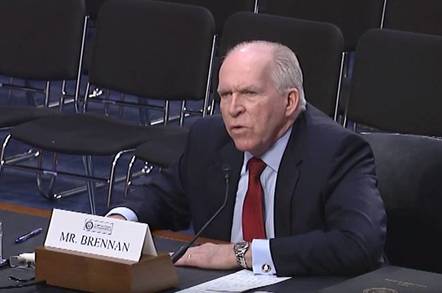 Another member of the Crackas With Attitude hacking group has been sent down – after breaking into the email accounts of more than 10 US government officials, including the then-director of the CIA.

Andrew Otto Boggs, aka "Incursio," 23, was part of a five-person group – three in the UK and two in the US – calling itself Crackas With Attitude. They targeted government officials at the end of 2015 by sweet talking their way past Verizon and Comcast staff on the phone so they could access their victims' ISP accounts. This allowed the miscreants to rifle through their email and telecom history so they could "fuck the gov," court records state.

The first target in October 2015 was a big one – then-CIA Director John Brennan. Boggs and his associates, led by unnamed UK hacker "Cracka," successfully convinced Verizon staff to change the password for Brennan's AOL account.

The team used the information to make harassing calls to Brennan and his wife, as well as getting control of the Twitter, Verizon and Norton accounts used by the CIA boss' family. The hackers then leaked the information to the press and, while no sensitive data was published, the CIA's head did have the double embarrassment of both being hacked and having himself outed as an AOL and Norton user.

Information from the accounts was sent to WikiLeaks, which published it in three tranches on October 21, 22 and 26. Boggs was an enthusiastic member of the team, according to records found on his hard drive and social media accounts. He supported the team and actively applied to join up in future hacks.

"I want to carry on [Cracka's] legacy if or when he is arrested," Boggs said, "I know he'll receive a harsh sentence because our government doesn't like being embarrassed, so there's no better way of protesting than hacking and leaking more documents over and over again."

Other high-profile hacking victims are thought to include the US National Intelligence Director James "does not collect" Clapper, FBI Deputy Director Mark Giuliano, and President Obama's Senior Advisor on science and technology, John Holdren. Over a five-month period, the prosecutors claim that 10 government officials and their families were hacked. The cost of cleaning up after the incidents was put more than $1.5m, not to mention the embarrassment caused.

In November the hacking team also got access to the Law Enforcement Enterprise Portal (LEEP), an intranet for America's cops, again by social engineering to get the login credentials. They then posted 296 pages of personal information on police officers and federal agents on Pastebin and Cryptobin, tweeting that it was a good thing that they weren't Russian or Chinese hackers.

By January the group discussed swatting a police department. Swatting involves making fake phone calls claiming violence that would lead to the deployment of armed officers. As it turned out, they didn't go that far and instead Cracka phoned in a bomb threat to the Palm Beach County Sheriff's Office, causing an evacuation.

"Imagine all the ppl running around thinking there is a bomb in the building," Boggs' co-conspirator Justin Liverman told the group in a Jabber chat.

Sadly for the group, their operational security was as poor as their spelling and punctuation. Boggs was caught because the IP address used to register his Twitter account was his family's home internet connection in North Carolina. British police started catching up with hackers on their side of the Atlantic and the game was soon up.

On the hard drives seized in the raids, police found plenty of evidence of malfeasance, including videos of hacking taking place recorded on Bandicam by Liverman and others. They also found the employee information for 20,000 FBI officers and 9,000 DHS staff on Liverman's computer after he and Boggs were arrested last September.

Boggs, of North Wilkesboro, North Carolina, in the US, pled guilty on January 10 to hacking charges. On Friday, he was sentenced to two years behind bars. Liverman, 24, of Morehead City, North Carolina, has also admitted guilt and will be sentenced later this month, while the British hackers are still being processed by the UK justice system. ®