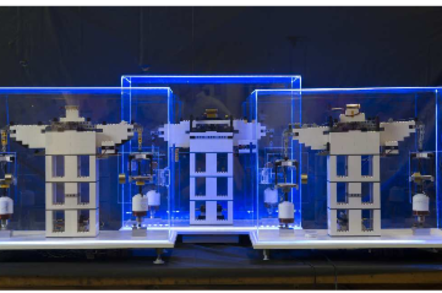 In 2014, NIST boffins used lego to explain the Kibble balance

While business around the world closed out a financial quarter or a financial year ahead of June 30, US boffins were working to a different deadline: linking the kilogram to electromagnetism.

Part of the world of metrology's long project to redefine the world's fundamental measurements, the aim is to define the kilogram in terms of Planck's constant.

The measurement was made on a NIST Kibble balance (known as the Watt balance until the death of its inventor Bryan Kibble in 2016). The science agency explains that the balance “uses electromagnetic forces to balance a kilogram mass. The electromagnetic forces are provided by a coil of wire sandwiched between two permanent magnets.”

Since they used the same device in this year's measurement as last year's, how was it that NIST reduced the uncertainty so far?

One part of the answer is a high threshold for boredom, it seems: the boffins conducted the same measurement for 16 months up to April 2017.

The other reasons depend on the two modes of operation of the Kibble balance:

During their experiments, the NIST boffins found they had overestimated the impact the coil's magnetic field had on the permanent magnetic field. That let them adjust their measurements, discovering an increased value for Planck's constant and reducing measurement uncertainty.

The researchers also conducted studies of how the coil velocity affected the voltage, by varying its speed from 0.5 mm per second to 2 mm per second.

As the NIST article explains, three other measurements of Planck's constant will be put forward to international metrologists for consideration: a Kibble balance measurement from Canada's National Research Council; and two measurements using the Avogadro technique (counting the atoms in a silicon sphere).

The agreement between the different measurements isn't perfect, but they're close enough that the values will be submitted to the CODATA group for consideration as the definition of the kilogram. ®

Got any ecsta-sea? Boffins get octopuses high on MDMA – for science, duh

Reach for the lasers, with all eight arms!