No humans on Red Planet, straight-faced officials have the audacity to claim 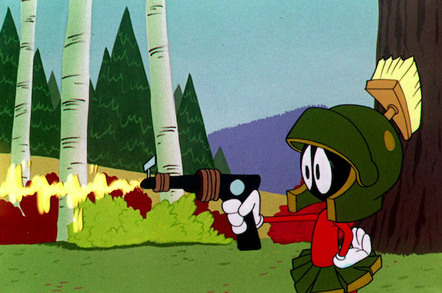 We had our doubts, too. Asking the US space agency's spokespeople to confirm or deny the existence of a murderous conspiracy in the barren badlands of our Solar System was one of the weirdest things we've ever done. Here's how it all came about.

On Thursday, one of President Trump's favorite talking heads, Alex Jones, interviewed ex-CIA officer Robert David Steele during his radio show. Steele made some astonishing – think nuttier than squirrel crap – allegations of NASA covering up that humankind already has an outpost on the Mars. And that the alien world was red not just with oxidized iron dust but with the spilled blood of innocent youngsters snatched off the street and shipped into outer space.

"We actually believe that there is a colony on Mars that is populated by children who were kidnapped and sent into space on a 20-year ride. So that once they get to Mars they have no alternative but to be slaves on the Mars colony," Steele claimed. How exactly they are still children after 20 years of space travel wasn't, funnily enough, explained.

"Pedophilia does not stop with sodomizing children," the former g-man continued. "It goes straight into terrorizing them to adrenalize their blood and then murdering them. It also includes murdering them so that they can have their bone marrow harvested, as well as body parts."

Jones, whose conspiracy-nut web channel Infowars now has White House press credentials, agreed that bone marrow was "the original growth hormone," but stopped short of endorsing the idea of a Mars colony. He did, however, repeat his oft-touted assertion that there are plenty of alien "chimeras" right here on Earth.

He also opined that NASA's rovers on Mars and orbiters above the surface are turned off periodically to hide machinery operating on the planet's surface. Jones has many other Martian theories that NASA doesn't usually comment on, but the agency has now released a statement on these latest claims.

"There are no humans on Mars yet," NASA spokesman Guy Webster told El Reg last night, presumably restraining himself from adding" "I can't believe I have to answer this kind of stuff."

However, Mars will have a very special anniversary on July 4th. While America is enjoying its annual Brexit 1776 celebrations, NASA will be celebrating having 20 years of continuous Martian observation from probes on and around the Red Planet.

On July 4, 1997 the Mars Pathfinder mission landed the Sojourner rover on the Martian surface. Since then, NASA has had a continual presence in and around the planet. Sadly the Sojourner lasted only 83 days before dust choked off its solar cells, but now there are two rovers trundling across the surface and another scheduled to land in 2020.

Mankind will eventually get to Mars – NASA and other space agencies are planning just such a trip and Elon Musk is fanatical about getting there. But this hack will eat his hat if they find any evidence of interplanetary sex slaves having their organs harvested. ®

PS: Here's some bonus Alex Jones, who is, don't forget, a pal of President Trump.