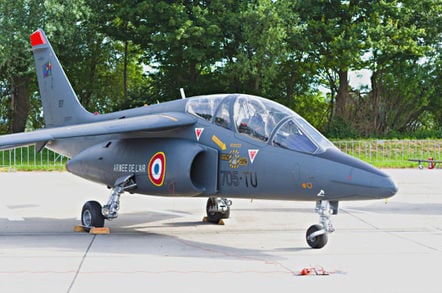 Fancy an Alpha Jet as your personal taxi to the Mediterranean coast?

A French general stands accused of using military fast jets for weekend commutes to his country pile in Provence on the country’s sunny south coast.

The Dassault-Dornier Alpha Jet is used as a basic fast jet trainer by a number of air forces around the world, including France’s. Its maximum level speed is around 990kph, giving a realistic cruising speed in the region of 600kph or so. The two-seater was said to have been flown from the south-western Atlantic city of Bordeaux to sunny Salon de Provence, on France’s Mediterranean coast.

Each alleged flight would have cost les contribuables thousands, given the customary landing fees and the cost of fuel; Alpha Jets burn somewhere in the region of 900 litres (approx 200 gallons) per hour during cruising flight, according to military contractor Air USA. The 301 statute mile flight might take about an hour, including a margin for time spent routing through airways, loitering in holding patterns, and so forth.

With the approximate price of Jet-A1 being £0.52 a litre at the time of writing, anyone making that flight in that jet would have burned through a cool £468 of fuel per flight. This doesn’t include landing fees, or the notional costs of operation (depreciated maintenance, etc) included by beancounters.

Air Force officers using service aircraft for private jollies is a dubious tradition that goes back decades. In 2008 Prince William, then a serving RAF helicopter pilot, was rapped over the knuckles for picking up his brother Prince Harry in an RAF Chinook helicopter before flying him to a stag party on the Isle of Wight; William’s Station Commander had been kept in the dark over the true nature of the “training” flights.

Back in the Second World War, Wing Commander Tom Neil acquired a Supermarine Spitfire after finding it seemingly abandoned near the USAAF unit he was attached to. After having the aircraft’s entire paint scheme stripped off, including its serial number, Neil spent the last year of the war treating the fighter like his personal property instead of equipment issued to the RAF, gallivanting all over the skies of Europe at will.

Once more and more people started asking where exactly the Spitfire had come from, Wg Cdr Neil pondered increasingly desperate measures to permanently rid himself of it, including baling out over the English Channel and leaving the fighter to crash itself into the sea. During this period he was also aware that an air commodore had been court-martialled and stripped of his rank for “acquiring” an obsolete Gloster Gladiator biplane under similar circumstances. The full tale of Neil’s Silver Spitfire, including how aviation historians deduced its true identity and eventual fate, is related in his book of the same name. ®