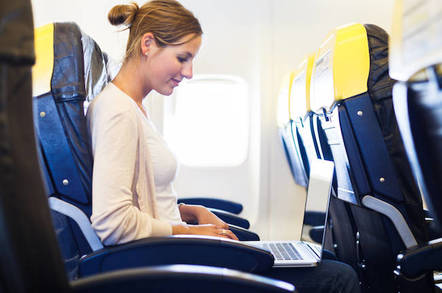 Folks flying into America must endure extra security checks if they want to bring their laptops into airplane cabins. In a press conference on Wednesday, US Homeland Security boss John Kelly announced the introduction of:

"We cannot play international whack-a-mole with each new threat," Kelly said. "Instead, we must put in place new measures across the board to keep the traveling public safe and make it harder for terrorists to succeed."

This all comes amid fears terrorists are plotting to blow up planes using bombs disguised as computer notebooks. Airline reps have warned the above super-screening is likely to increase waiting times at airports.

The new rules will apply to anyone – American citizens and non-citizens – jetting in to the US from 280 airports in 105 countries. Homeland Security officials estimate the tighter checks will affect 325,000 air travelers every day.

Any passengers refusing to comply will not be allowed to take electronics larger than a smartphone into the cabins on flights to the US. Additional sanctions against airlines may be levied if they don't comply. Sadly, stashing valuable gear in the hold, as opposed to carry-on, is not a great idea: it can get bashed about, seized and scanned, or nicked.

Last month, Kelly said that he'd like to see laptops banned on all flights coming into the US, as they have been for months on flights coming in from 10 foreign airports in eight countries. It appeared that policy would be enacted after Delta put up signs warning passengers in San Francisco not to carry their laptops on flights into the US from May 12.

I guess I’ll need to buy another paper notebook and paper book for my return flights to the US.

In a phone call to The Reg at the time, a spokeswoman for US Customs and Border Protection said the posters were put up in error, adding that a ban would kick in at some point, though. However, the agency later walked back on that. European and Asian airlines had balked at the strict crackdown, and the plan was shelved – in part. Now it's back with some caveats: you can carry on your laptop, provided you undergo enhanced screening.

Homeland Security won't say precisely what this enhanced screening is going to involve, but it seems it will include new technology to scan devices at overseas airports and roving sniffer dogs. Foreign airports will have "weeks or months" to implement the new procedures, Kelly said, adding that he hoped overseas "partners" will also add their own extra security precautions in addition to the fresh American rules.

"Unless we all raise our security standards, terrorists – who see commercial aviation as the greatest takedown – will find and attack the weakest link," Kelly said. "Together, we have the opportunity to raise the baseline on aviation security globally, and we can do it in a manner that will not unduly inconvenience the flying public."

Meanwhile, Nicholas Calio, who leads US airline trade body A4A, said this latest security red-tape was produced without much input from the industry, and urged the Trump administration to focus on tackling real risks rather than nebulous fears.

"We recognize and share Department of Homeland Security's commitment to addressing threats to aviation security. US airlines not only share that commitment, but have substantial, practical expertise on these matters as we work every day to protect our passengers, crew, aircraft and the public,” said Calio.

“While we have been assured that carriers will have the substantial flexibility necessary to implement these measures on a global scale, we believe that the development of the security directive should have been subject to a greater degree of collaboration and coordination to avoid the significant operational disruptions and unnecessarily frustrating consequences for the traveling public that appear likely to happen." ®

And with no public scrutiny? D'ya think that's possible?