Sit down Kitt, be humble 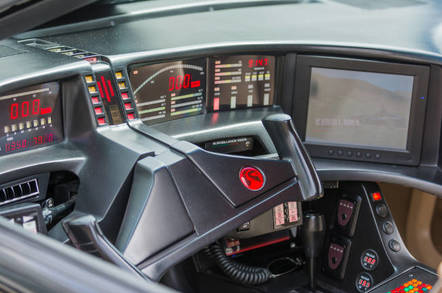 Science fiction ... Knight Rider would be a nightmare for regulators

The head of US trade watchdog the FTC has pushed for companies to loosen their ties over self-driving cars.

Speaking at an event for the National Highway Transit Safety Administration (NHTSA), FTC boss Maureen Ohlhausen said legislators need to use "regulatory humility" when it comes to autopilots.

Touting the self-driving technology as a way to reduce traffic deaths, Ohlhausen told the highway safety bod that rules on self-driving cars should be slackened.

"We regulators must keep that benefit in mind to ensure that our approaches to connected cars do not hinder such a positive outcome," she said [PDF].

"And at the FTC it means we must continue to work with our sister agencies, like NHTSA, to avoid unnecessary or duplicative regulation that could slow or stop innovation, and ultimately leave consumers worse off."

Ohlhausen went on to suggest that the FTC focus its efforts on protecting personal information, rather than looking at the specifics of auto-pilot. She referenced the model the FTC used for medical data as a blueprint for automakers.

"I think we can draw lessons from our substantial experience with health privacy," the FTC chair said. "In that area, we coordinate frequently with the Department of Health and Human Services. For example, we often decline to pursue cases that HHS is pursuing. "

In general, Ohlhausen says, the FTC will relax control over self-driving cars and let the NHTSA shoulder most of the burden when it comes to making rules and regulations governing the auto-piloted vehicles.

The comments should be greeted as good news for the likes of Google and Uber, who have been pushing for fewer regulations on their testing of autonomous cars. Recently, state legislators in Washington and Texas have passed executive orders and laws that ease the restrictions on testing cars without using human drivers. ®

PS: If you're struggling with the headline, see there's this rapper called Kendrick Lamar who recorded a 10 HR-violations-a-minute track called Humble and... look, we're dangerously close to missing our down-with-the-kids targets for June so just give us this one please. Thanks, fam 😭