TNT Express systems blown up by, er, yeah, you get the idea 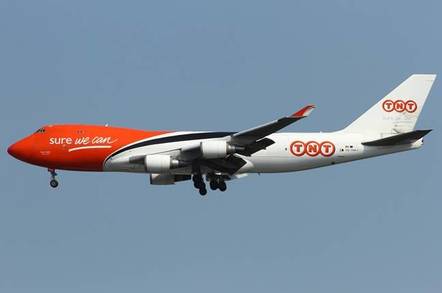 FedEx has suspended trading of its shares on the New York stock exchange after admitting that its subsidiary TNT Express has been hit by "an information system virus."

The big package giant said no information had been stolen by the cyber-nasty and only some offices of TNT Express appear to have been disrupted. After yesterday's global Petya NotPetya outbreak, it would be logical to assume the file-scrambling bastardware has claimed another victim. FedEx isn't responding to requests for comment.

"Remediation steps and contingency plans are being implemented as quickly as possible," it said in a statement on its website.

"TNT Express domestic country and regional network services are largely operational, but slowed. We are also experiencing delays in TNT Express inter-continental services at this time. We are offering a full range of FedEx Express services as alternatives."

If the problem is NotPetya, then FedEx wouldn't be the first transport company to get hit. Container ship giant Maersk – which controls 16 per cent of the world's cargo shipping – reported its servers and terminals had been borked by the malware, sparking fears of knock-on problems in the global supply chain.

One of the reasons these firms are getting hit is possibly because they have global networks of offices sharing computing resources. The NotPetya malware spreads primarily through network shares, and if individual offices aren't locked down and firewalled then the malware could have spread from Ukraine to their networks.

The other possibility is that TNT Express uses the MeDocs financial software. The NotPetya malware was pushed out after persons unknown hijacked MeDocs' software update system, and so this might have caused the issue. Again, FedEx isn't saying if it's using MeDocs.

"We cannot measure the financial impact of this service disruption at this time, but it could be material," FedEx said, indicating that cleaning up the malware mess could take a lot of time. ®

PS: Nuance Comms was hit, too, by the software nasty.