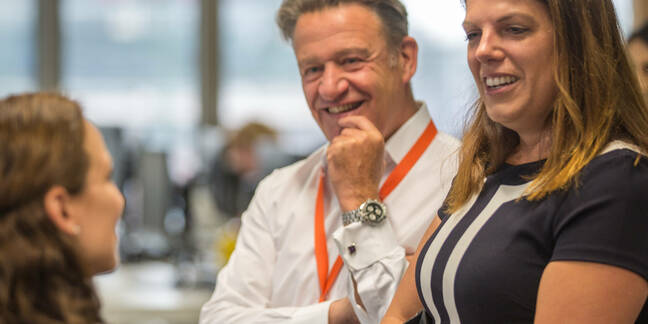 Comment The appointment of UK digital minister Caroline Nokes yesterday was met with some sniggering when it was revealed she was formerly the chief executive of the National Pony Society.

Her posh-girl credentials could not have appeared more obvious if she’d ridden into the Government Digital Service wielding a hockey stick while shouting tally-ho.

But at the risk of sounding like some sort of Michael Gove apologist, the fact she is a non-expert in the area is not in itself a bad thing. Or to put it another way, she is surely no worse than the majority of her Parliamentary peers when it comes to understanding technology.

Former Cabinet Office minister Ben Gummer, who was ousted from his seat in Ipswich, was previously responsible for the "digital" brief and lacked a background in the sector.

And while his predecessor Matt Hancock had worked for his family’s computer software company, former Cabinet Office minister Francis Maude's pre-Parliamentary career was as a barrister.

Maude is regarded as having achieved more than most in trying to break the insane amount of money the public sector still spends on, frankly, crap IT. (Although despite his efforts we are still yet to see the IT "oligopoly" broken up, according the National Audit Office).

What is more troubling about Nokes’ appointment is that digital appears to have been palmed off to a junior minister rather than being part of a cabinet minister’s brief.

Cabinet Office minister Damian Green, it seems, is too busy with the grown-ups to be bothered with it. Of course, the department will probably say that Nokes’ appointment as a dedicated digital minister is a recognition of its importance, but insiders don’t see it that way.

You may well ask, who cares about government websites anyway? Amid the fear and paralysis permeating the civil service at the prospect of Brexit planning (yes, even more than usual) perhaps there are bigger things to worry about than blogging about fonts.

But there has always been a compelling case for overhauling our expensive IT contracts and designing something better. If Joe Public didn’t glaze over at the talk of IT, they’d be more of a scandal as to why the public sector still spends up to £20bn a year on it. In fact, there are many folk in and around government who have been calling for reform long before GDS arrived on the scene.

Brexit makes that all the more urgent, as we will need to de-couple our clunky IT systems from decades of European policy.

For example, where will it leave HMRC’s £70m Customs Declaration Service - which is at the heart of the Brexit debate and has already been identified as facing major risks? Or the Home Office’s troubled immigration systems? And what about the Department for Environment, Food & Rural Affairs, whose systems are among the most exposed to Brexit.

One contact commented there are something like 16 different government departmental systems that need to talk to each other to deal with freight at the border.

Another outlined the subject of animal movements as a simple case in point. “We track them badly right now - if there was another foot and mouth outbreak, we wouldn’t have a clue where animals had been and which other animals they had touched.  There is lots of IT but the data quality is poor, and the EU insist on paper accompanying every movement.”

This, he said, is a perfect opportunity to make that all online, all data rich with data quality checking on input, and to link movements so that we could track backwards in the event of an outbreak.

But unfortunately it seems that is caught up in a row as to whether it should be open source, an in-house build, something that is bought as a package, while the legacy systems continue to sit in the IBM data centre which will eventually have to be moved at great cost for no value.

If only someone at the centre could gallop in to the rescue with a proper pan-government plan. ®