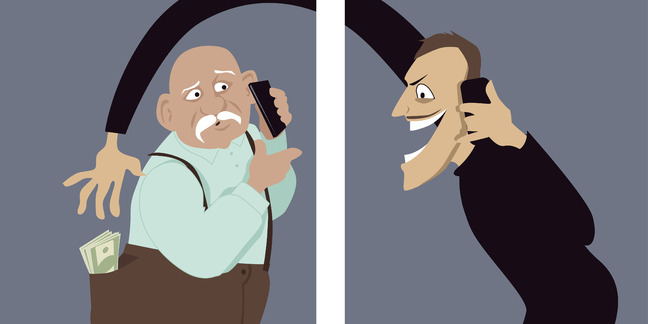 Four Britons have been arrested on suspicion of helping organise fraudulent telephone support scam calls that caused “hundreds of millions of pounds” of losses worldwide.

The City of London police force – working with forces in Surrey and the UK northeast as part of “Operation Thistle” – collared the four alleged mischief-makers yesterday following what it described as “two years’ work” in conjunction with Microsoft, BT and police organisation Action Fraud, among others.

A 37-year-old man and a 35-year-old woman were cuffed in South Shields, near Newcastle-upon-Tyne, yesterday morning, and were later released on bail.

In a related raid, a 29-year-old man and a 31-year-old woman were nabbed in Woking. Both were “released pending further enquiries.” All were arrested on suspicion of fraud relating to what police described as “computer software service fraud.”

It is believed the four did not make calls themselves.

Under police bail reforms, the bailed individuals must be charged or released altogether within 28 days.

“The arrests have come about as a result of work by the City of London Police and forensic and investigative services provided by Microsoft analysing tens of thousands of Action Fraud reports and working with other affected organisations such as BT, to attempt to trace the source of the problem,” said the City cops in a statement.

They added: “This analysis and enquiries undertaken by the City of London Police have shown that many of the calls originate in India and that the worldwide losses from victims are thought to be in the hundreds of millions of pounds.”

In the scam, which is relatively common in the UK, a cold caller posing as Microsoft tech support tells the victim that there is a problem with their computer and “tech support” must be granted remote access to “fix” it. Once access is secured, “tech support” then runs riot, stealing personal information, planting malware, and other forms of dastardly wrong-doing.

“Recently there has been an increase in contact via a pop-up on the victim’s computer which then prompts them to phone the suspect,” said the police.

Tech support scammers are by no means a new threat in Blighty. If the arrested people turn out to have been linked to the super-prevalent scam – which tends to succeed against elderly and vulnerable marks – then it is to be hoped that appropriate criminal charges follow. ®