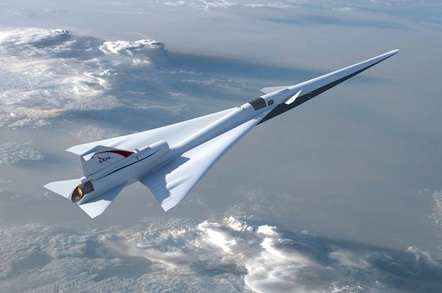 NASA says the preliminary design review of its Quiet Supersonic Transport (QueSST) project suggests it is possible to create a supersonic aircraft that doesn't produce a sonic boom.

We've been able to build supersonic passenger planes for decades, but they're tricky things. Russia's Tupolev Tu-144 proved highly unreliable. Concorde's design saw it capable of supersonic flight but because it was so noisy it generated complaints when flown over populated areas of land. Even when flying below the speed of sound, it was often noisier than always-subsonic aircraft and generated plenty of complaints around airports, which try to keep things as quiet as possible so as not to disturb nearby residents.

A quieter supersonic passenger aircraft has therefore long been on designers' minds, as there's a market for faster travel over land as well as oceans.

Which is why NASA is running the QueSST program; the agency fancies developing some technology the United States' plane-makers can use to Make America Great Again.

It's therefore encouraging that NASA says “Senior experts and engineers from across the agency and the Lockheed Martin Corporation concluded on Friday that the QueSST design is capable of fulfilling the LBFD aircraft’s mission objectives, which are to fly at supersonic speeds, but create a soft 'thump' instead of the disruptive sonic boom associated with supersonic flight today.”

NASA's commercial supersonic technology project manager Peter Coen explains, in this video, that “the idea is to design the airplane so that the shock waves that are produced in supersonic flight are arranged in such a way that you don't have a boom. You have just a general kind of a gradual pressure rise that produces a quiet sound.”

NASA's next step is finding organisations willing to build a working model of the Low Boom Flight Demonstration (LBFD) experimental airplane and fly it over American cities and towns to hear how much noise it makes. It's hoped those flights could start in 2021. ®