50th anniversary of the ATM opens debate about mobile payments

What's the future of cash? 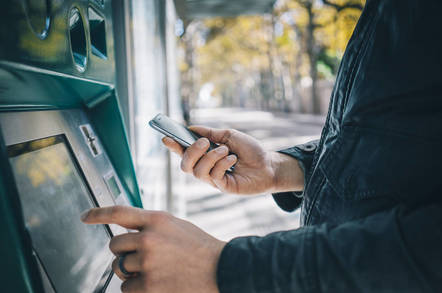 Analysis Today marks the 50th anniversary of the Automated Teller Machine (ATM), the first of which was installed outside Barclays Bank, Enfield Town in north London.

Actor Reg Varney from '70s sitcom On the Buses was the first to use the cash machine. Fast forward half a century and cash machines have become a familiar high street sight with 70,000 in the UK alone and three million worldwide.

The move towards a "cashless society" and mobile payments raises questions about whether ATMs will stand the test of time or decline, like coin-operated pay phones before them.

Research by global payment outfit PPRO Group suggests many Brits believe that within the next 10 years the country will be entirely cashless due the influx of alternative payment methods.

Given the option, 26 per cent of Brits would never choose to pay cash when buying an item in a shop, according to a poll of 2,000 Brits commissioned by PPRO Group. Last year 38 million mobile payments transactions worth £288m were completed, a 247 per cent increase on the year before, according to research from payments outfit Worldpay.

Despite this rise in mobile and contactless payments, 42 per cent of UK consumers still use ATMs just as much as they always have, according to a separate poll commissioned by ACI Worldwide. Around one in three (29 per cent) of UK respondents would like to see ATMs offer better and more secure means of authentication.

Cash machine security has always been a concern, with card skimming and more recently malware on compromised devices posing an increasing risk to ATM users. Some see incorporating biometrics into cash machines as a way of making transactions more secure.

"Of course, a big concern for ATMs is balancing convenience and security," said Jose Diaz, director of payment strategy at Thales e-Security. "The use of mobile devices and biometrics at cash point will not only provide a more convenient method of taking out money but it will also help counter incidents of identity theft and card skimming, providing better and stronger authentication."

"It’s unlikely the ATM [will reach] its 60th anniversary, and with 44 per cent of us stating that we rarely use them to remove cash from our accounts any more, it will not be long until ATMs are consigned to the history books," Black said.

"The ATM was groundbreaking in its initial purpose to reduce the need for people to go into a bank branch to withdraw money, but the rapid adoption of digital payments means the core function of an ATM - distributing cash – is fast becoming redundant. In the digital age, cashless payment methods are king." ®

Don’t talk to the ATM, young man, it’s just a machine and there’s nobody inside

On-Call But there was a network tech inside, wiring it up. And in the right bank, this time