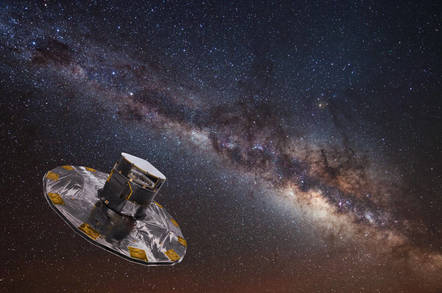 Hypervelocity stars (HVSes) are flung from the Way's Galactic Center and can reach speeds faster than our galaxy's escape velocity. Only 20 unbound HVSes have been discovered so far, and most of them are late B-type stars – brighter and larger than our Sun – with velocities between 300 and 700 kilometers (186 and 435 miles) per second.

ESA’s Gaia mission is trying to construct the most detailed 3D space map by measuring the position and distances of far-away stars. Billions of objects have been detected so far, generating a treasure trove of data suited for artificial neural networks to comb through.

Out of the two million stars from the Gaia Data Release 1 – measurements taken over a year from July, 2014 – 80 HVS candidates were found using this method.

A team of researchers led by Tommaso Marchetti, a PhD student at Leiden University in the Netherlands, are presenting their results this week at the European Week of Astronomy and Space Science, a conference held in Prague, the Czech Republic.

A paper published at the end of May in the Monthly Notices of the Royal Astronomical Society describes their system.

“We have developed from scratch an artificial neural network with five input units (the astrometric parameters), two hidden layers of neurons, and a single output neuron for binary classification,” the paper said.

First, the system needs to be trained. Since HVSes are rare, using real data for training is not enough. Instead, the researchers simulate mock data based on real results from the Gaia catalogue with inputs describing a star’s coordinates, distance and brightness. They then calculate its velocity.

Next, the fake catalogue is split for training, validation and testing. An algorithm processes the input and matches the output to a 0 for a normal background star and 1 for an HVS. It is then applied to new, unlabelled data taken from Gaia Data Release 1 to estimate the probabilities of a star being an HVS by looking at the output results.

“In just an hour, the algorithm reduced the dataset on two million stars to some 20,000 stars – only 1 per cent of the catalogue,” said Elena Maria Rossi, co-author of the paper and researcher at Leiden University. “A further selection including only measurements above a certain precision in distance and motion brought this down to 80 candidate stars.”

The results show that HVSes are complex dynamic systems. Fourteen stars have a total velocity in the Galactic rest frame, but 5 of these have a 50 per cent probability of escaping and fleeing the Milky Way. Another five stars were already runaway stars with a median velocity of between 400 and 780 kilometers per second.

“These hypervelocity stars are extremely important to study the overall structure of our Milky Way,” Rossi explained.

“These are stars that have travelled great distances through the Galaxy but can be traced back to its core – an area so dense and obscured by interstellar gas and dust that it is normally very difficult to observe – so they yield crucial information about the gravitational field of the Milky Way from the center to its outskirts.” ®