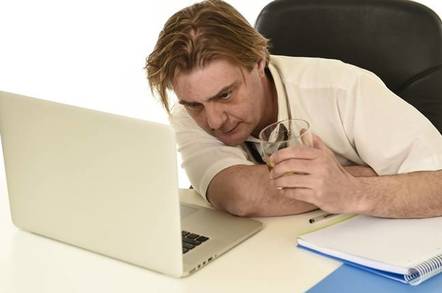 Our dramatic reconstruction of Flanagan's shenanigans

Fueled by beer and bitterness, a US techie logged into his ex-employer's radio towers to sabotage them – and is now behind bars as a result.

Adam Flanagan, 42, of Bala Cynwyd, Pennsylvania, worked as an engineer for a company that built radio masts used by utility companies to collect power and water usage data from home energy meters.

When he was let go in 2013 after an unsatisfactory employment review and then failing to pull his socks up, he took revenge on his ex-bosses after some boozy nights on the town.

Within weeks of leaving his job, the base stations built by his former employers – who have not been named – began to disconnect from the radio network. Access logs showed that Flanagan had taken to remotely connecting into the towers at night using their root passwords, which still worked for him. He then changed the passwords – in some cases to "fuckyou" – uploaded Pink Floyd song lyrics in place of key code, changed the radio frequencies used by the towers, and added ASCII art to the masts' firmware.

Between March and May, 2014, six base stations were deactivated across the US East Coast. After discovering that the failures were deliberately caused, the company called in federal investigators, who quickly identified Flanagan as the chief suspect.

A master criminal Flanagan certainly wasn't. He performed the vandalism from his home internet connection, and his public IP address was all over the intrusions like greasy fingerprints. Agents were able to quickly link him to the unauthorized accesses, although he did tell investigators that he occasionally used a Verizon wireless card too.

"The times I did like I said were like coming home from the bar drinking, making very stupid decisions," he told FBI investigators [PDF]. "As far as a master hacking ring. That's insane. That is... I mean I wish I had that skill."

Flanagan told the Feds that he wanted to "fuck with them," and to take revenge against a former manager, Mike Gaston. At first he denied changing root passwords, but then admitted doing so because he "was just very annoyed at one of the persons that worked there."

In March this year, Flanagan pled guilty in the Eastern Court of Pennsylvania to two counts of unauthorized access to a protected computer. This month, he was sentenced to a year and a day in the cooler for admitting his crimes early – as opposed to the 90 years he was facing – along with three years of probation, and was told to cough up $40,000.

Remember, boys and girls, don't drink and hack when bitter. ®