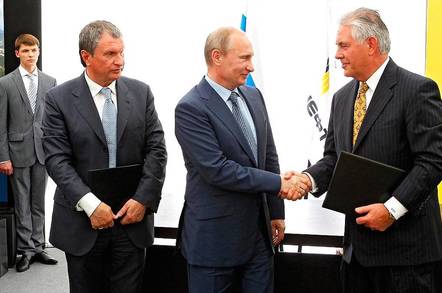 Analysis US Secretary of State Rex Tillerson has expressed a willingness to work directly with Russia on cybersecurity and other issues.

The proposed partnership is surprising, given the continued controversy over allegations that the Russians interfered with last year's US presidential election – a serious accusation at the center of an ongoing Congressional inquiry.

Secretary of State Tillerson reportedly wants to work with Russia on attempts to deescalate the Syrian civil war and North Korea's missile program, in addition to cybersecurity. The first of these ambitions is particularly difficult in the wake of Russia's belligerent warning that it was prepared to treat US warplanes as potential targets following a recent attack on a Syrian regime aircraft.

Tillerson's efforts in attempting to mend fences with the former Cold War foe could help ease pressure on US cyber infrastructure, which many top officials and strategists consider vulnerable.

Bill Hagestad, a former US Marine Corps lieutenant colonel turned cyber conflict author and researcher, told El Reg that although "willingness to collaborate, communicate and cooperate at the cyber-strategic level" between the two super-powers would be a positive objective, the US still needs to tread carefully.

"The willingness to work together if stated as the commander's intent at the Secretary of State level promotes positive tactical actions at all levels of both governmental agencies and the military – essentially a directive and guideline for future cyber cooperation," Hagestad explained.

"The caveat is that both sides must mutually agree and abide by the rules of engagement, based upon trust in each other and confidence that in the absence of attribution confirmation, those on the front lines, eg, mouse and keyboard, will always strive to act appropriately.

"Conversely, if the strategic level is agreed upon, and one side or the other agrees but acts surreptitiously and in a deceitful way for exclusive self-gain – well then the whole concept of cyber cooperation is for naught," Hagestad warned, saying that establishing trust in cyberspace, especially with Russia, is fraught with difficulties.

"In the case of Russia, any nation state must carefully be aware of their proclivity for taking advantage of such cooperation, especially in the cyber domain – and even more distinctly when it comes to the Russian use of cyber in conjunction with combined arms such as espionage, kinetic means, and physical invasion of a sovereign state – eg, Estonia and Ukraine." ®

PS: President Obama ordered US government hackers to plant spyware in Russia's key networks amid intelligence that the Kremlin was working hard on derailing America's elections, it was reported today.