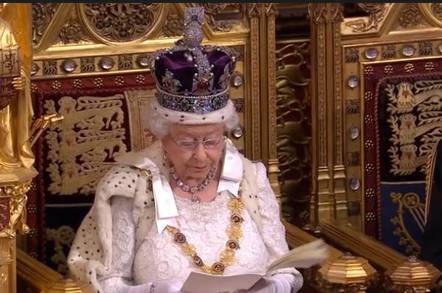 The government is to pass new laws to protect personal data and create a commission for countering extremism on the internet, the Queen announced in the annual state opening of Parliament today.

Her speech revealed a scaled legislative programme focused on delivering Brexit, with Theresa May's minority government having ditched a raft of manifesto pledges – including expanding grammar schools and a free vote on restoring fox hunting.

However, plans announced in the manifesto for a digital charter remained.

Legislation will also be introduced to modernise the courts system – something that successive governments have been attempting to do for some time.

Unsurprisingly Brexit dominated the speech, with eight bills relating to the UK's departure and its implications for key industries.

The recent terror attacks were also mentioned, with the government's counter-terrorism strategy to be reviewed "to ensure that the police and security services have all the powers they need" and that the length of custodial sentences for terrorism-related offences are sufficient to keep the population safe.

She said: "My government will bring forward proposals to ensure that critical national infrastructure is protected to safeguard national security. A commission for countering extremism will be established to support the government in stamping out extremist ideology in all its forms, both across society and on the internet, so it is denied a safe space to spread." ®