No, really. You can see through walls using drones and Wi-Fi 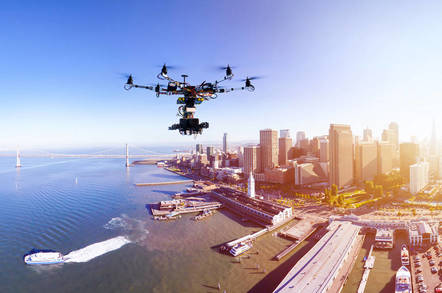 Video Drones can perform three-dimensional imaging of objects through walls using Wi-Fi, a team of researchers demonstrated for the first time.

Chitra Karanam, a PhD student, and Yasamin Mostofi, a professor at the department of electrical and computer engineering at the University of California, Santa Barbara, presented their results [PDF] at the Association for Computing Machinery/Institute of Electrical and Electronics Engineers International Conference on Information Processing in Sensor Networks.

“Our proposed approach has enabled unmanned aerial vehicles to image details through walls in 3D with only Wi-Fi signals. This approach utilizes only Wi-Fi RSSI measurements, does not require any prior measurements in the area of interest and does not need objects to move to be imaged,” Mostofi said on Monday.

RSSI stands for received signal strength indicator. A drone beams radio waves at 2.4GHz, and another drone on the other side of the wall measures the power of the signals.

The strength of the received signal drops by a certain level depending on the presence of objects through the wall, Mostofi explained to The Register.

“3D imaging is harder than 2D, since there are a lot more unknown areas. We approximate the wave model and solve Maxwell’s equations that describe the propagation of the Wi-Fi waves. Next, the signals are compressed to form an image,” she said.

Just like pixels make up a two-dimensional image, voxels describe a patch of three-dimensional space. The final step is to use the voxels to build a model of the interior hiding behind the walls.

Both drones are always parallel with one another and travel in a zig-zag motion. They hover outside the 10-cm (4-in) brick walls, sweeping the area at different angles to try to get a good picture inside.

But it’s not possible to catch everything, and the researchers have to fill in the blanks by employing a bit of nifty guesswork during the modelling process.

“Each voxel looks at its neighbors’ image decisions. For instance, if a voxel’s own decision is that this voxel should be empty but then the neighbors’ decisions are all full (non-empty), then the voxel may want to revise its decision since there should be a spatial correlation.

“So the belief propagation method is a way of doing this iterative update. At some point, the image will converge to something and will not change any more. That is the final imaging result we produce, and its quality has improved a lot beyond that initial processing phase,” said Mostofi. 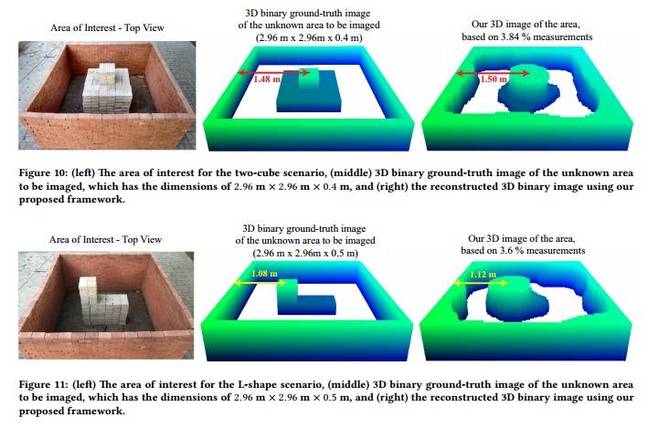 Some of the clear structure like edges are lost. But the drone manages to estimate the length of objects to a pretty good accuracy – a wall that is actually 1.48 metres is measured as 1.5 metres.

It’s not the first time Wi-Fi has been used for imaging. A group from MIT used it to capture human motion behind a wall. But the UC Santa Barbara group are the first to do this with drones, they claim.

The brick wall scenario is simple, and a lot of problems have to be solved before drones can be used for more complex situations like search-and-rescue operations, structural modelling to monitor the state of buildings and bridges, or inspecting potential archaeological sites.

There’s definitely room for improvement, Mostofi said. Issues such as interference from other Wi-Fi networks or needing better image processing methods will need to be addressed before it’s applicable in the real world. ®