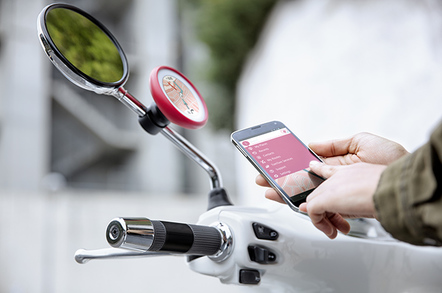 Conceptually JPALS is more or less a cyclist using the TomTom app, as seen here

American defence firm Raytheon has said it is in talks with the Ministry of Defence to put the US Navy’s “satnav for F-35s” system onto new British carrier HMS Prince of Wales.

The USN’s Joint Precision Approach and Landing System (JPALS) is already being integrated onto the service’s F-35Cs and the US Marine Corps’ F-35Bs – which are the same model as the UK is buying.

JPALS is currently under development, with initial operating capability (meaning “we can use this in anger if needed”) scheduled to be reached between 2019 and 2020.

"We’re working with the UK government to see if we can add this to the second ship," Bob Delorge, vice-president of transportation and support services at Raytheon, told Flight Daily News at the Paris International Airshow, which takes up all week. “The window of opportunity for this is probably a couple of years out for the UK.”

The GPS-based JPALS is accurate to within “10 – 20 cm relative to a moving point (or set of points) aboard a ship,” according to Stanford University. The idea of the system is that aircraft fitted with it can be steered safely home without the ship (or land operating base) having to broadcast its precise location to anyone listening out for it, as happens currently with tactical air navigation (TACAN) type systems. In essence the main difference is that the JPALS signal is encrypted, unlike TACAN.

As the JPALS aircraft module can reportedly be fitted to helicopters as well as fast jets, it may interest the RN – particularly with the potential to allow easier cross-deck operations with American and potentially Italian aircraft; the EU nation is another F-35B customer. The USN is buying 22 sets of JPALS to install in both carriers and land bases for training purposes.

HMS Prince of Wales is the second of the UK’s two new 65,000 tonne aircraft carriers. While PoW’s sister ship, HMS Queen Elizabeth, is currently scheduled to deploy with a joint RAF/RN/USMC air wing of F-35s, PoW will enter service filling the Landing Platform Helicopter (LPH) role currently being performed by HMS Ocean, due to be sold off next year. In the strike role both QE-class carriers are intended to be capable of launching up to 108 F-35B sorties per day, a rate that compares reasonably well to the Americans’ newest carrier USS Gerald R. Ford. Some 40 per cent larger by displacement than QE, the Ford is designed to support around 160 launches and recoveries per day.

HMS PoW herself is still under construction at Babcock Marine’s Rosyth dockyard.

The Ministry of Defence replied to our questions and we featured them in this followup story. ®