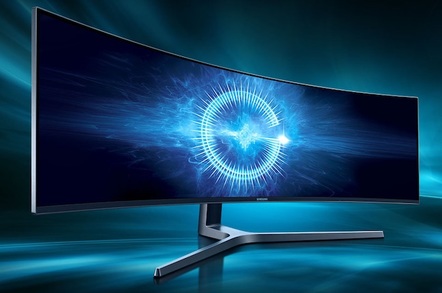 The Register doesn't spare a glance for news of monitors but we made an exception when we learned of Samsung's new CHG90.

Samsung has built the monitor for gamers, as apparently they'll enjoy the immersive experience it offers.

The Register can imagine businesses will find plenty of uses for it too. For starters, one big screen with one electricity cable will mean tidier desks for multi-monitor users. Serious spreadsheet jockeys may also be interested, as 3840 x 1080 will allow you to keep a whole lot of columns on-screen. The US$1,499 price tag will also be easier for business to swallow, more so when you consider the GPU needed to make the monitor look its best.

Just in case we haven't shoe-horned in sufficient justification for running this as a Reg story, Samsung says it reckons the monitors will mean game developers can be confident their work will get the visual representation it deserves. And who would cross a developer? ®