Microsoft HoloLens apps to be piloted with 'Hogwarts for the MoD' chapesses, chaps 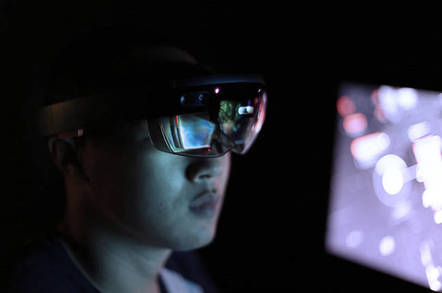 Not one of the students. Pic Shutterstock

Pearson’s theory is that the apps won’t lead to a dystopian future without teachers, but instead teachers can use them to make education even better, said Mark Christian, who heads Pearson’s work on the augmented reality/virtual reality front.

Work on designing augmented reality apps began in April last year as part of a project with Microsoft, which covers about half the bills and helps with development, Christian said. So far, Pearson has run trials with 18- to 21-year-olds at the Royal School of Military Engineering in Chatham, Kent, as well as in the US and Australia.

In July, he says Pearson will start trials at public high schools in Auckland, New Zealand. And Pearson will debut its apps with 16- to 18-year-olds at the Welbeck Defence Sixth Form College in Loughborough, Leicestershire (where Pearson already manages education), in the autumn. Welbeck is sponsored by the MoD and funds students who plan on making a career in the UK military (although it also takes in a small number of privately funded kids).

One of the apps that students will get to try displays a simulated human body that students could walk around and interact with — useful for anatomy classes. Another is a maths app that students could use in geometry or trigonometry class if the teacher’s 3D drawing skills leave a little bit to be desired. There’s also a chemistry app for building molecules, or a history app for viewing objects in virtualized museums.

Under the project, Pearson purchased 50 HoloLens headsets: it uses 10 for development and 40 across all its trial sites. As part of the agreement with the schools, it will leave a few HoloLens headsets behind with the apps installed when the trial ends, Christian said.

At the Royal School of Military Engineering, which began trials in September, Pearson claimed that knowledge retention, engagement and the time to train after using Pearson’s augmented reality construction app on the HoloLens have all improved. HoloLens has made the drudgery of construction more interesting, Christian added. Other results are pending.

One snag for schools looking to adopt the HoloLens might be funding. Spending in England alone on 16- to 18-year-old education has been falling for the past 25 years. It was only about £6bn from 2015 to 2016, according to a report [PDF] by The Institute for Fiscal Studies.

Christian said Pearson will eventually be giving away some of its underperforming apps for free, while others are paid. But he admitted that the current upfront costs of the HoloLens will probably be too difficult for most state-funded schools to handle.

Unless the cost of the HoloLens goes down, Pearson develops a breakthrough, or schools settle for using a VR version of the apps (without the ability to interact with others as with the HoloLens versions), then adoption may be faster among schools in the private sector.

Microsoft has not yet responded to a request for comment.

Microsoft has sent us a statement:

“We developed Windows Mixed Reality as a platform to work across virtually any device type. We expect our partners to build devices ranging from $300 to $3000, including tethered, untethered, fully opaque and transparent displays, giving our customers choice to fit their unique lifestyles."®

You are the weakest Lynx