BOFH: Halon is not a rad new vape flavour

Migrate data? If you're keen on seeing clouds... 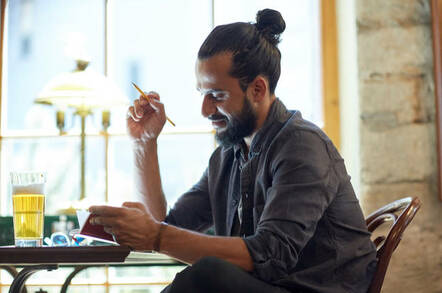 So when you use our virtualised.... er, beer? I dunno, do you have any wheatgrass juice? Pic: Shutterstock

"What's up?" the PFY answers warily.

"Nothing - just having an interesting conversation with a bloke from an outfit that deals with infrastructure obsolescence, code debt and I.T. asset leveraging."

"Ah yes, I thought I felt a disturbance in the force," the PFY nods.

"Well if you've got the time I think you'll find this really interesting."

"Really? You've not heard what he's got to say."

"You mean something about high replacement of hardware versus virtualised hosts, uhhhhhhmmmmm, the problems with developing our own systems as opposed to encouraging staff to use vanilla off-the-shelf products, aaannnnnnd how we could use the money we're spending in IT on other blue-skies technology which will launch the company well into the 21st century?"

"An advert which was disguised as an 'industry event'?"

"YOU JOINED A WEBINAR - or, as we call it - willingly watched an advert?"

"Right, so if someone came up to you and suggested that they take half an hour out of your day - at a time of their choosing - to show you a PowerPoint presentation of their product you'd tell them to take a hike, right?"

"But if they tell you it's a webinar then that's all different?"

"And you were so taken by the presentation you invited them here - to OUR WORKPLACE - to try to advertise to the PFY and me?"

"It's not an advert; he's just suggesting a discussio.."

"A discussion about our systems with a scripted sales pitch aimed to point out all the faults in our IT just before proposing a solution which will save our company 40k a year - NO WAIT!, maybe 100K a year in IT costs?"

"And there are two of them, the smooth one and the geeky one?"

"There are two people but I don't know that there's a..."

"The smooth one will probably have... a sports jacket and a polo neck while the geeky one will be... in some fashionable denim, pointy shoes and retro paisley shirt. And a beard - with a... 60% probability of a hair bun - because he's the edgy authentic woodsman type."

"You just watched them come in on the security cameras!" the Boss says.

"Didn't need to - it's the standard ensemble for new wave hucksters."

"I don't think it'd hurt to have a quick coffee with them and hear what they have to say."

"We'll stay till one of them mentions their Paleo diet, veganism or caffeine intolerance," the PFY offers.

"Well that was quick," the PFY says, 2 minutes and 28 seconds later.

"You didn't give them a chance!" the boss blurts.

"Sure I did," I respond. "I let him bang on about ethically sourced beans, their holistic approach to core health - whatever that means - and even tolerated his tangent on pesticides in Arabica crops. But he had to go full Paleo-dullard on us."

"You need to hear what he has to say!"

"No I don't. It's always the same. We'll make substantial savings that we'll be able to use for other things - only we won't because all those savings AND MORE will be swallowed up in the implementation phase. Then, in two years' time - after someone's handed you your resignation letter to sign (or you've been lynched for choosing such a crap setup) we'll pay another small fortune to some other crapbox company to do the same thing all over again."

"What will it hurt to listen?" the Boss asks.

Around about now I realise that the Boss already has some form of verbal agreement in place that he wants the PFY and I to rubber-stamp the technical side of.

"I think you'll find that the proposal covers all the bases and ticks all the boxes," Polo-neck says.

"Oh, they're minimal. It's just a standard install for us," Hairbun says.

"So you'll take all our data from the various databases and slap it in your database?"

"Well, we thought that you'd probably want to do that," polo neck blathers.

"And how often does that occur in real life?"

"Most of our clients go down that road."

"And how many of your clients find 'that road' is a poorly signposted one-way street ending up with a couple of guys with bad teeth playing banjos - before it really takes a turn for the worse?"

"Well SOMEONE has to move the data and no one here knows what your schema is, so if we want to complete the data migration THIS CENTURY we'll need help from your people."

"So my question was HOW MANY of those 'most of our clients' actually end up paying you to migrate their data for them - at their cost?"

"Well we take a cooperative approach with all our clients."

"Obviously an agreed hourly rate would b..."

"And presumably we 'agree' on that rate after we've forked over the product cost, tried to do the data transfer and failed and are facing a company backlash?"

"It's hard to know a rate without knowing how many hours are involved - there's obviously economies of scale..."

"We help all our clients."

"Ballpark figure," the PFY says, "What does your average client spend on data migration?"

"Well none of our clients are 'average'," Hairbun says.

"Ordinarily," I say, "at this point my assistant would be unlocking the floor-to-ceiling windows along the side of the office. A couple of minutes after that, I'd make a gasping panicky phone call to security, babbling about a tragic workplace accident. They'd call emergency services and place another tick inside the TWA box on their whiteboard."

"Well I don't see any point continuing this conversation," Polo-neck says, as he and Hairbun get up quickly to leave before things get nasty. "In any case, we already have a signed contract."

"Oh. Is our door not opening?" the PFY innocently, reaching for the window key.

"Maybe you should bang it a couple of times," he says, twisting the key in the nearest window and unlocking it.

"You could maybe cry out," I suggest. "Call for help. Although this room in a former life was a printer room, so it has truly exceptional soundproofing."

"Perhaps phone a friend?" I ask, as Hairbun scrabbles with his phone - only to find no bars, thanks to the blocker in the ceiling space above his head.

"Look," Polo-neck says. "Perhaps we got off on the wrong foot here. Maybe you don't understand the situation."

"Or maybe you don't understand YOUR situation," I suggest. "See this room is a lot like that contract - in that it's far easier to get into than out of."

"Oh," Polo neck replies. "So I take it you want us to tear up the contract."

"That's completely up to you," the PFY says, swinging open the window.

"Both copies," I suggest.

"And pop them both in our bin."

"Now the good part," I say. "You get to pick the window - because we like to take the cooperative approach with our vendors."

"Well, my assistant and I are just going to pop into the server room for a while. While we're in there - working away on some urgent issue - I suspect there's going to be some sort of inexplicable problem with our Halon system which will make it discharge into this office and not the server room."

"I still think it was a little unfair not to state 'cardboard boxes containing all the old CRTs we had in storage'," I say, "but then we need to look on the bright side."

"We're one TWA tick away from an H&S refresher course with a free lunch."