AR and VR in data visualisation – can it ever be useful to our puny human minds?

'The biggest challenge is to not misrepresent the data' 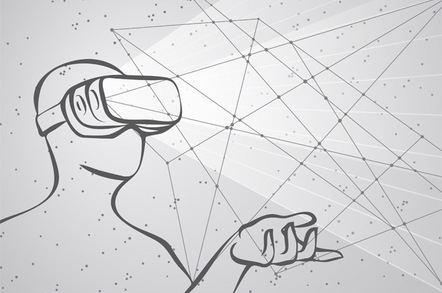 Advocates of data visualisation using virtual or augmented reality argue that both let your brain do what it does best. Namely, pick out and memorise patterns by walking through the data using 3D and assisted by colour, movement, sound and even touch to represent extra dimensions.

See that cluster of bright red, bobbing orbs emitting a low drone in the corner of the room? Congratulations, you've just identified a new customer segment.

We are, supposedly, on the cusp of a revolution with VR and AR being far more intuitive than mouse and monitor.

That's the promise – but it's not yet quite the reality. Startups, research labs and curious individuals are trying to figure how best to visualise data in VR and AR. One of the best known startups, Virtualitics, won $4.4m from investors in April.

But the field is a Wild West of competing platforms and interfaces, and it's unclear which, if any, will win out. Some even believe there is a risk that VR can distort our view of data – while others have rejected it, at least for now, as a serious tool of analysis.

David Burden, managing director of 3D platform specialists Daden, spent six months trying to get his firm's software to work in VR, but eventually decided to stick with monitors. He is sceptical that viewing a 3D visualisation is any better in VR than on a flat screen.

"One of the issues is with the current generation of headsets you get a very narrow field of view," he says. "You're moving your head around a lot... we're flying backwards and forwards, so all of a sudden you're doing all the things that start to get people nauseous in VR."

Headset displays cannot yet match the resolution of a high-end monitor, meaning that a data point that would show up as a single pixel on a screen might get lost in VR. "You can't get that level of resolution, so you lose some of that data in VR," he says.

During initial analysis, where you need to look at a lot of data rapidly in different visualisations to find something interesting, using a screen remains a lot quicker and more comfortable over extended periods, Burden believes. "Trying to do that in VR is just silly," he argues, and is surprised so many companies are attempting it.

Instead, he thinks VR is "very powerful" at the end of the process, when you fly colleagues or clients through the data to show them what you have already found (Datascape's visualisations can be viewed in VR on Google's basic, mobile-based Cardboard).

This is the approach taken by LOOOK, an AR studio that has designed a tool for KPMG clients to inspect 3D table-top graphs using Microsoft's $3,000 Hololens AR headset. "This is a visualisation tool, it's not an analytics tool," says Sébastien Motte, LOOOK's chief executive.

But others insist analytics really can be done inside VR – it just needs a good engine to prepare the data first.

Next page: Who wants to hang out in messy data?
Page:
Tips and corrections
3 Comments