You're all too skeptical of super-duper self-driving cars, apparently

What do we have to do to make you love us, er, autonomous vehicles, ponder senators 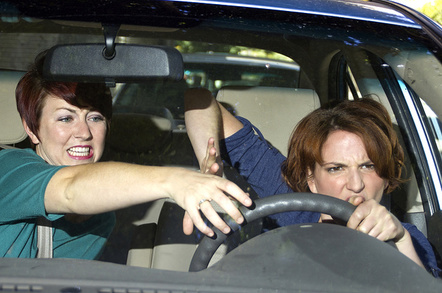 Lamenting the 35,000 people in the US who died in motor vehicle crashes in 2015, Senator John Thune (R-SD), chairman of the Senate Committee on Commerce, Science, and Transportation, on Wednesday held a hearing in Washington, DC, on the need to win public support for automated cars and to rethink regulation.

"Industry must find ways to show the technology is safe and reliable to address public skepticism," said Thune. "The federal government must also recognize that it does not have all the answers. Instead, it must seek outside technology expertise to begin the hard work of updating existing standards and setting new rules."

Thune presided over the first hearing on self-driving cars about a year ago, and returned for a sequel focused less on what's possible than on supporting the nascent industry.

Absent from the room were any naysayers. Those speaking at the hearing – Mitch Bainwol, president and CEO of the Alliance of Automobile Manufacturers, Rob Csongor, veep and general manager of Nvidia's automotive business, John Maddox, president and CEO of the American Center for Mobility in Ypsilanti, Michigan, and Colleen Sheehey-Church, national president of Mothers Against Drunk Driving – all looked to self-driving cars as a way to reduce traffic injuries, to make mobility available to more people, and to address issues like traffic congestion.

In a spin on sentiment generally attributed to sci-fi writer William Gibson – "The future is already here. It's just not evenly distributed" – Bainwol said, "For self-driving technologies, the future is here but will take a while to be fully realized."

A while in this case is three decades, more or less. That's when Bainwol believes fully automated Level 5 systems will represent the majority of vehicles on US roads. He doesn't expect Level 5 vehicles will be commercially available until 2025 at the earliest. He said Level 3 systems, capable of automated driving in bumper-to-bumper freeway traffic, could debut within a year.

Presently, cars on US public roads are using Level 1 (driver assistance, like cruise control) and Level 2 (partial automation, like Comma.ai or Tesla Autopilot) systems, which are supposed to be used under constant human supervision.

One obstacle is old people, a group touted as beneficiaries of on-demand robo-cars. "Only 5 per cent of people over 65 years of age think the technology is 'awesome,' and almost a third believe self-driving technologies are a 'terrible idea' – three times higher than the views of those under 29 years of age," Bainwol said.

Bainwol made the case for a unified federal approach by noting that this year, there have been 70 different legislative proposals related to self-driving cars in 30 states.

The message conveyed by Nvidia's Csongor was similar. "Safe, robust AI algorithms are improved through the collection of large amounts of data," he said. "Ideally, we would be able to test fleets across all states with their diverse driving conditions. A patchwork of different regulations in different regions hampers development and progress."

As might be anticipated, Maddox, who oversees a testing facility for futuristic vehicles, expressed support for government-funded standards and testing.

And Colleen Sheehey-Church's assertion that her organization supports the development of Level 4 and Level 5 automation to reduce drunk-driving accidents proved similarly predictable.

There were no surprises: All four panelists invited to speak before legislators endorsed legislative intervention.