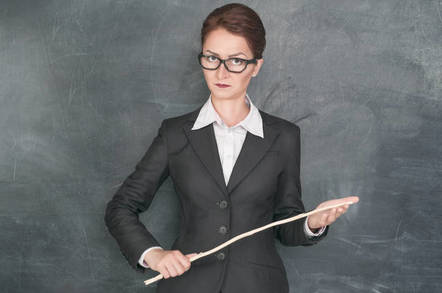 Currys PC World was today placed on the naughty step by toothless watchdog the Advertising Standards Authority over the way it misleadingly promoted savings to push laptops sales.

A disgruntled consumer contacted the ASA to question the retailer's £200 discount claim on a lappy that was initially priced £1,149.99 for just 21 days between 25 October to 14 November.

Only seven of the products were sold by Currys during that timeframe so it sliced a couple of hundred quid off the list price. The ad on the website was seen by the complainant on 16 December, at which point 74 units had been purchased at the lower cost.

The laptop was sold at no other price prior to the higher level and there was no intervening price, so Currys believed it was selling the PC with savings claimed from the immediate price.

The retailer reckoned consumers splashing out on a new portable PC were likely "tech savvy" and had resources and brain power to judge if the price was genuine.

But the ASA judged the ad to be misleading – consumers were likely to understand the £200 claim represented a genuine saving against the usual selling price at the time the ad appeared.

The watchdog said: "We noted that the ad included smaller, less prominent text in a faint font which indicated when the product had been available at the higher price. We considered many consumers were unlikely to notice the smaller grey text."

As the PC was on sale at the higher price for just 21 days and the lower price for 32, the "£1,149.99 was not the usual selling price of the product. We considered that the 'was' price should generally have been on sale for longer than, or at least for the same length, as the lower promotional price to constitute the usual selling price of the product and for the saving claim to represent a genuine saving."

Currys must not publish the ad again in its current form, the ASA said. Further, it told the retailer to not mislead consumers or base savings claims on promo prices that were available for a "materially longer period of time" than the "was" price, and where more units were sold at the lower price. ®