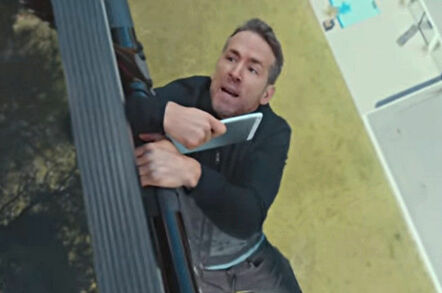 The UK Advertising Standards Authority has rapped BT on the knuckles for claiming its Smart Hub delivered "the UK's most powerful Wi‑Fi signal".

Following a barrage of complaints from competitors and the general public, the watchdog ruled that the telco broke 12 ASA rules with its series of ads, featuring Deadpool star Ryan Reynolds dangling from a helicopter while bellowing that his Wi‑Fi signal was nice and strong.

It was "inaccurate" and "misleading" of the one-time state monopoly to claim that the Smart Hub provided a "stronger signal" than all its competitors, said the ASA, which received 61 complaints, including from rivals Virgin Media, Sky and TalkTalk.

The authority also looked in depth at BT's testing methodology, and one part of its written summary leaps out of the page:

BT did not test the signal when multiple devices were being used simultaneously, as they did not consider that this was relevant to claims about the power and reach of the Wi‑Fi signal, and in any case they did not think it would impact on the ranking as it would serve to slow down the signal from all routers tested.

Put another way, BT didn't test the signal under conditions that might have caused it to slow down, even though most homes have more than one Wi‑Fi device connected to the router at any one time. In addition, both Virgin and Sky pointed out that the testing was done with specially generated network traffic instead of on a live broadband network.

The ASA ruled that this was OK despite admitting: "The device had been connected to a testing tool that generated network speeds faster than those that BT's own broadband network was capable of."

The offending advert has been viewed some 3.5 million times on YouTube alone, with countless more on telly and radio stations across the land during its 10 months on air.

In spite of this, the ASA rejected more than half the complaints, which had argued that the claim of a 200-metre (219-yard) signal range was misleading. Reviewing the supplied BT test data, the ASA said it "measured TCP throughput of a 2.4GHz signal from a BT Smart Hub when connecting to a tablet up to a maximum distance of 500 metres (547 yards) on an outdoor test range... the results showed a mean throughput of 40.2Mbps at 200 metres (219 yards), which was a usable Wi‑Fi signal."

Helpfully, having ruled that it is OK to broadcast ads about technical capabilities based on tests made in laboratory-equivalent environments instead of the real world, the watchdog then dubbed BT's range claim as "fantastical and illustrative in nature". Clear? Neither are we. ®