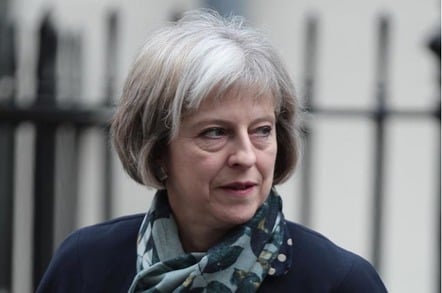 Theresa May and Emmanuel Macron are planning to issue multi-million pound fines to technology companies that don’t act fast enough to remove material that governments and police forces disapprove of.

The UK Prime Minister and her French counterpart are meeting in Paris today and, among other Brexit and security-related topics, the online fight against extremism is on the agenda.

After the London Bridge murder spree on 3 June, May boasted that she would “regulate” internet companies harder as a response to the attack, in spite of there being little or no evidence that the murderers did anything particularly technological while planning their van-enabled killing spree against innocent Saturday night revellers.

Her response was condemned as “short sighted” by the Open Rights Group, while Professor Alan Woodward of the University of Surrey suggested to The Register last week that the G7 might try and agree some form of heavier regulation, which was agreed in principle by the rich nations’ talking shop last month.

Given that France and the UK are seemingly going it alone today, it appears that the international appetite for cracking down on service providers is noticeably thin.

At today’s Paris meeting, May is expected to launch a joint campaign with the French to tackle online radicalisation by creating “a new legal liability”, in the government’s words, for technology companies who do not remove user-generated content that falls foul of police or governmental opinion.

In the current climate, these powers are clearly intended to target Islamist content and similar material intended to radicalise the unwary into carrying out terrorist attacks.

Writing in today’s Times, Assistant Commissioner Mark Rowley of the Metropolitan Police told the Great British Public: “We welcome the Prime Minister’s commitment to look at the whole strategy, including powers and capabilities available to the security network.”

Rowley added: “And we need communications and internet-based companies to show more responsibility. It is too easy for the angry, violent or vulnerable to access extremist views, learn about attack methodologies, conspire on encrypted applications and then acquire equipment to kill, all online.”

Domestically, May’s plans are being welcomed by politicians. Labour MP Yvette Cooper, chairwoman of Parliament’s Home Affairs Select Committee told the Guardian newspaper: “Still today YouTube is showing illegal propaganda videos for banned jihadi and neo-Nazi extremists.” An El Reg investigation into YouTube discovered that a fan of the banned terrorist group Hezbollah, operating under the pseudonym “Party of Allah”, was earning money from adverts on the video hosting website.

May has for years been leading the charge to give police whatever powers they want to ensure that nobody in Britain, extremist cell or ordinary family alike, is able to communicate on the internet without being eavesdropped on by the police.

She is keen to build on what she sees as her successes with domestic spying laws such as the Investigatory Powers Act, which allows police and others to engage in online dragnet surveillance of guilty and innocent alike with few practical constraints and little oversight. ®