We can probably ignore Theresa May, but Angela Merkel wants digital rules 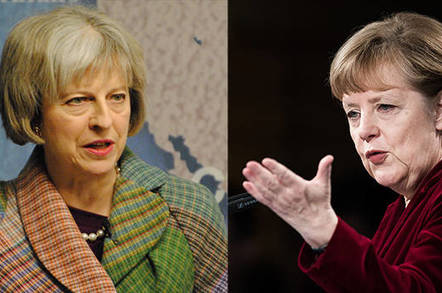 The two most powerful women in Europe still have their eyes firmly on internet regulation.

Fresh from her failure in the UK general election, still-prime minister Theresa May used her first public address announcing a new coalition government to stress that she will continue her self-declared "cracking down on the ideology of Islamic extremism and all those who support it."

Meanwhile, in a speech in Mexico City at the weekend, German chancellor Angela Merkel argued that there need to be global digital rules similar to those that exist for financial markets, enforceable through international organizations like the World Trade Organization.

During the UK election process, and following terrorist attacks in London and Manchester, May focused in on the internet – in particular services like Google and Facebook – and blamed them for creating "safe spaces" for extremism.

That criticism was in part seen as an effort to distract from the fact that May had herself overseen a significant reduction in police resources and numbers as home secretary – a situation that cost her dearly with voters.

But both May and her home secretary Amber Rudd (who only just managed to get re-elected) have pushed and passed laws that give the authorities greater spying abilities – most controversially in the demand for real-time access to individuals' online activities and backdoors to encryption.

Those controversial powers are what May was referring to in her speech when she said she would be focused on "giving the police and the authorities the powers they need to keep our country safe."

Her ability to deliver that promise is far from certain, however. Many contend that May's authority has been fatally weakened because her decision to call the recent election – an effort to increase her political majority – ended up losing her the ability to pass legislation without the support of Northern Ireland's Democratic Unionist Party (DUP). How long she can remain prime minister is an open question.

Angela Merkel's authority meanwhile is not under any doubt – at least until elections in September.

Germany has become an outspoken critic of internet companies that do not remove or delete illegal content within short timeframes, and the German parliament is considering legislation that would introduce significant fines for companies like Twitter, Facebook and Google if they fail to act quickly.

In addition, Merkel has been pushing for a Europe-wide series of laws and rules to clamp down on such content. Over the weekend, she used her speech in Mexico to argue for global restrictions.

"We still have no international rules," she said, standing next to Mexican president Enrique Peña Nieto, warning that standards have been introduced erratically across the globe. She spoke in favor of "sensible rules" and said that Germany would use its presidency of the G20 to develop a concrete set of digital policies at the forthcoming summit in Hamburg next month.

She drew parallels with a G20 agreement to deal with cyber attacks on the global banking system, and noted that Europe and the United States need to work together on new common standards.

That last part is unlikely to happen any time soon. The fact that the speech was given in Mexico and that she and other European leaders (as well as Canada) have publicly distanced themselves from the Trump administration following president Trump's decision to move away from the Paris climate change accord has put a stick in the spokes of transatlantic cooperation.

However, Europe's determination to push new rules on the global internet is persistent, and with Merkel deciding to make it a central part of a G20 summit, there is clearly confidence that something solid will result. ®