Then again it has been four years coming 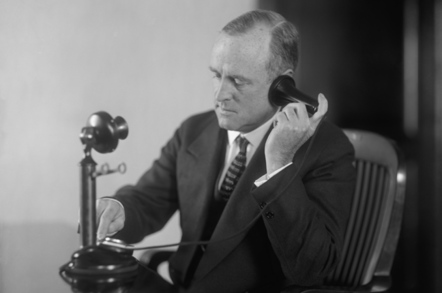 "I have just been royally upset by them," writes Tim Moore, a RTX Skype phone owner in South Devon, in an email to The Register.

According to Microsoft, SkypeKit gave internet-connected devices and applications, such as the Dualphone VOIP phone, the ability to make Skype video or phone calls. It was essentially a mish-mash of software and APIs.

In July 2013, Microsoft announced that it was ending support for the SkypeKit software development kit within 12 months because "it does not deliver a consistent Skype customer experience or support our cross-platform application-development efforts". It also advised that it was retiring all versions, meaning that applications created with the SDK would no longer be able to use Skype.

Now there are over 200 replies in a Microsoft Community forums thread about no longer receiving phone calls on Skype handsets by RTX Dualphone, Belkin and other non-Microsoft manufacturers.

David Barnett, from Tring, Hertfordshire, told The Register that he stopped receiving calls on his RTX 4088 Dualphone for Skype on 2 June. He had used it as a business line from multiple locations. Skype on his PC still works, he says.

Moore says he found out earlier this week, when people contacted him on his mobile to say he was unreachable on his RTX 4088 Dualphone, which he also used as a business "landline" in the UK and abroad. When he checked, he noticed that all incoming calls went to voicemail, but he was no longer receiving email notifications as usual and could not listen to the voicemails.

When he contacted Skype support, he was advised that Skype phones would no longer receive calls after 1 June. Although Skype refunded him his phone credit and "line rental" (£12) he says he has not recuperated any costs towards lost business and now has an unusable Skype phone. "This is service of the lowest order," he writes. "Incredibly bad."

In a statement, Microsoft reiterated that it had already announced the death of SkypeKit years ago, but the move had become more pressing. "The reason some might be experiencing the impact of the retirement of Dualphone now is due to an extra push to move Skype from a peer-to-peer service to a cloud-based infrastructure," a spokesperson wrote. "We can confirm that due to this migration, older phones are no longer supported."

A list of devices no longer supported can be found here and devices supported after migration to the cloud here.

Someone from good ol' helpful Microsoft posted the same response in the forum thread on June 8. Barnett says he showed that forum message to Amazon, where he bought his Dualphone about a year ago, and he was offered a refund. Others might not be so lucky.

And there's more – Microsoft has also announced it will be retiring Skype on Windows Phone 8, Windows Phone 8.1, Messaging app for Windows 10 Mobile, Windows RT or a TV as of 1 July. ®