Have you seen Arkit? Is someone channeling Oasis? 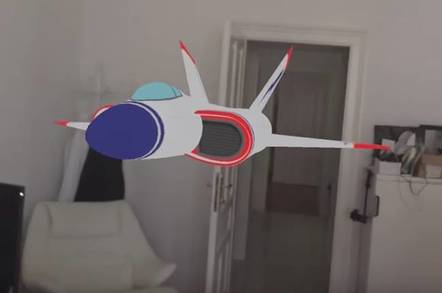 Ya right ARKit? ... A demo of Apple's library to plot motion-tracked graphics over camera input (Source)

Apple's most significant announcement at its Worldwide Developers Conference was not its vaporware HomePod speaker. Rather it was ARKit, an iOS framework for placing digital graphics into mobile device camera scenes while taxing batteries.

Where VR demands high-end hardware, antisocial headsets, tolerance for motion sickness, and the unyielding belief that immersive 3D content is better than the alternative, AR asks less and delivers more by piggybacking on reality and everything that comes with it.

AR has been the next big thing for several years, driven by demos of Microsoft HoloLens, Google's Project Tango, and venture capital vacuum Magic Leap. It now appears to have arrived.

There are already a variety of third-party SDKs for AR development, such as ARToolKit, ARmedia, Vuforia, and Wikitude, in addition to Microsoft's HoloLens SDK and Google's Tango SDK. This year, Apple and Facebook have thrown their hats into the ring.

Facebook in April introduced its Camera Effects Platform and Apple now has ARKit, leaving only Amazon unaccounted for among the major platform empires. HTC, Samsung, and Sony perhaps deserve mention, but as hardware-focused companies they're Android allies.

ARKit provides a way for developers to track the orientation of devices with active cameras and to understand the geometry and lighting of captured scenes. Armed with this information, those creating apps can position graphics that remain fixed on surfaces like table tops, floors, and walls as the camera perspective shifts. It's more engaging than it sounds – below is a video of it in action.

"ARKit is huge," said iOS developer Steven Troughton-Smith in a Twitter post on Tuesday. "Apple's being very upfront about its aspirations, [and] pulled off a HoloLens-style demo sans smoke and mirrors live on an iPad."

But the reason ARKit looms large isn't so much developer enthusiasm for new kinds of apps that will be possible. Rather, it's Apple's ability to push its users to update to the latest version of its mobile operating system. As he has often done in years past, Apple CEO Tim Cook highlighted his company's update advantage at WWDC, noting that while 86 per cent of iOS devices now run iOS 10, only 7 per cent of Android devices are running the most current Android release, Nougat.

As for Google's Tango SDK, it has hardware requirements that have limited its adoption.

With Microsoft MIA on the mobile front, that leaves Facebook as the other mainstream provider of AR tech on mobile devices.

ARKit matters because iOS 11 will make AR available on millions of devices this fall, and because it has the potential to extend the use of AR technology beyond games. Gaming is a known AR opportunity, and ARKit's support for the Unity and Unreal game engines will help there.

But as Craig Federighi, senior VP of software engineering at Apple, noted at WWDC, home goods retailer Ikea is exploring the technology to provide a way to visualize how its furniture will look in real-world environments.

Other businesses can be expected to find their own uses for AR, and ARKit offers an obvious point of entry.

The technology still has a ways to go, however. Apple's ARKit engineer Mike Buerli, in a WWDC overview of the SDK, cautioned that scenes full of motion or lacking scene complexity can prevent accurate tracking of the objects in camera images.

"So if I'm facing a white wall, or if there's not enough light in the room, I'll be unable to find features and tracking will be limited," he said.

Plane detection, meanwhile, works on horizontal planes like floors and table tops for the time being. Mapping images to walls will have to wait, or be handled by custom code.

And keep a charging cable handy. As one developer observed, "It's really rough on the battery." Another also noticed "major battery drain." ®