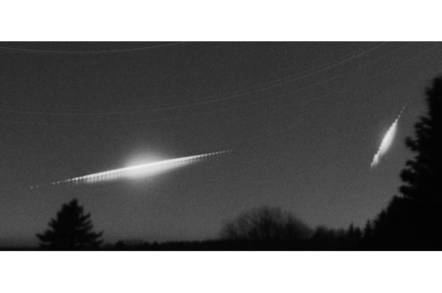 Two of the brightest Taurids in the 2015 shower, from the arXiv paper

The regular and often-unspectacular Taurid meteor shower has a dangerous side, with Czech boffins warning it's a likely source of dangerous debris.

Working at the Czech Academy of Sciences, the authors of this paper at Astronomy and Astrophysics (here at arXiv) analysed 144 fireballs observed in the 2015 Taurid shower, and say there's a previously undiscovered branch of the swarm that needs to be watched.

The Taurids have caused problems before. Most notably, it's believed to be the source of the famous 1908 blast near the Stony Tunguska River, attributed to 150-metre meteor from the swarm exploding in the sky over Siberia.

The largest meteor stream in the inner solar system, the Taurids are the source of four meteor showers each year – all most probably a stream of fragments created when one or more large comets broke up around 30,000 years ago.

The branch of interest to the Czech scientists is the Southern Taurids, and the fireballs caught be European Fireball Network were spotted between October 25 and November 17 2015.

From those observations, the paper argues two conclusions: the new branch has a “well defined orbital structure”, but worryingly, the branch includes asteroid-sized structures in addition to the two already known.

During the 2015 shower, the paper states the brightest fireball “was caused by a body in excess of 1000 kg, which corresponds to diameter more than one meter”.

“Based on orbital similarity, we argue that asteroids of several hundred meters in diameter are members of the Taurid new branch as well,” the researchers continue.

They also believe a Pacific Ocean fireball spotted by NASA's JPL was also part of the branch – and it was a biggie at “ten times more massive”.

The good news is that most of the Taurids seem to have a fragile and porous structure – but if any Earth-intersecting objects in the swarm are big enough, they could cause damage at continental scale, the paper says. ®

What a shower: METEORS will BLAZE a FIERY TRAIL across our skies

One for The Bumper Book of Astronomical FLOPS, then

'Like trying to push your way through a crowded room'

This is going to be a good one, we promise

A show for insomniacs everywhere