Golden handshakes of almost half a million at Wikimedia Foundation 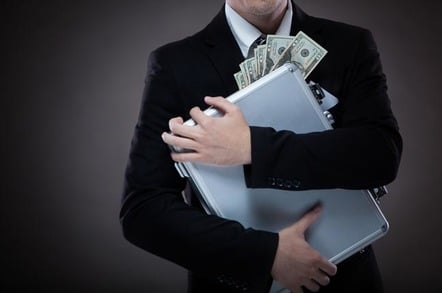 The Wikimedia Foundation (WMF) recently released a Form 990 for its 2015-2016 financial year. Once again, the foundation took almost a full year to do so rather than the standard five months.

The form shows that in the 2015 calendar year, the WMF – which relies on unpaid volunteers to generate the entire content of its websites – paid outgoing managers close to half a million dollars in severance pay:

The foundation – which claims transparency as its core value and says it is "committed to communicating with our volunteers, donors, and stakeholders in an open, accountable, and timely manner" – pre-emptively stated in its email announcement that although it recognised people would "have an interest in this topic", it would "not be commenting on the specific nature of the severance payments or circumstances which may be related to them".

The lion's share of the bounty – $208,306 – went to Erik Möller, chief instigator of Wikimedia's failed Wikinews service and its rather more successful Wikimedia Commons media archive. As WMF deputy director and VP of engineering and product development, Möller presided over a string of high-profile software engineering failures that have soured WMF relations with its community of unpaid volunteers in recent years.

In 2013, the new "VisualEditor" feature, hailed by Wikimedia chair emeritus Jimmy Wales as "epically important", proved so buggy that volunteers overrode Möller and switched it off. When the 2014 "Media Viewer" launch caused another volunteer uprising, Möller granted himself "superpowers" to shut volunteers out, resulting in a letter of protest endorsed by 1,000 volunteers (which the WMF ignored).

Wales, faced with accusations that the WMF had "a miserable cost/benefit ratio and for years now has spent millions on software development without producing anything that actually works", admitted he had "been frustrated as well about the endless controversies about the rollout of inadequate software not developed with sufficient community consultation and without proper incremental rollout to catch show-stopping bugs".

Still, Möller received a golden handshake enabling him to take a couple of years off. The Form 990 shows the foundation could afford it. (After another record fundraising year, its net assets – not counting $5m paid towards its endowment – stood at $91.8m in June 2016.) But is this what donors giving $15 "to keep Wikipedia online and growing" had in mind? 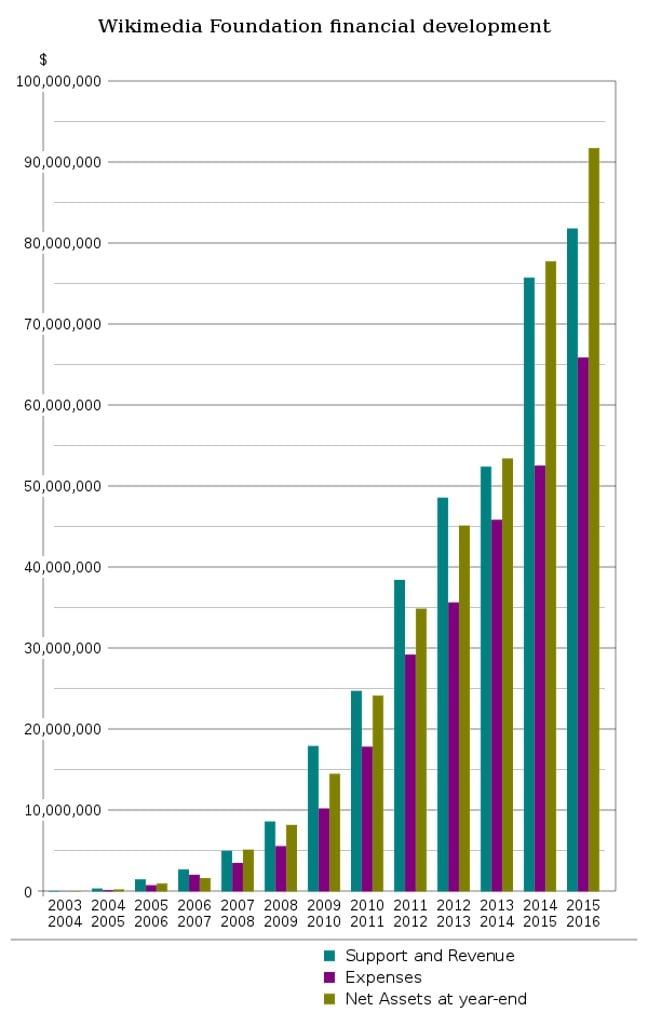 Damon Sicore, who took over VP of engineering duties from Möller in autumn 2014, got $100,000 in severance pay, for a total compensation of $292,258 – not bad considering that he only worked for the WMF for eleven months.

Sicore's main WMF legacy appears to be the role he played in the Knowledge Engine fiasco that led to executive director Lila Tretikov's resignation in early 2016. Sicore had been accused of being involved in "top secret" plans to take "a run at Google" and spend $32m of donors' money to try to turn wikipedia.org into a Google-beating search engine, but we cannot confirm this.

Reviewing the WMF's Form 990 has become something of an annual spectator sport. Last year's (PDF) showed that Sue Gardner, WMF executive director from 2007 to 2014, had scooped a $100,000 pay rise after stepping down in 2014. As the WMF eventually explained, after much prodding from volunteers, Gardner had received a generous bonus for "lost opportunities" (she stayed on longer than intended) and was secretly kept on the payroll as a "special advisor" after her departure.

The figure insiders are interested in now is Lila Tretikov's severance payment. The Form 990 states that Tretikov received no such payment during 2015. But the Form 990 only covers top executives' compensation during the 2015 calendar year, and Tretikov left in 2016. Observers are wondering whether next year's 990 will contain a real whopper.

Tretikov's base compensation in 2015, at $342,050, considerably exceeded the $191,603 Möller was paid in his last full year. Conceivably, next year's Form 990 might state that Tretikov received a cool half million of donors' money. The foundation could end such speculation right now and communicate with its "volunteers, donors, and stakeholders in an open, accountable, and timely manner", but given its track record is more likely to string it out as long as possible.

After all, the longer ago it happened, the less upset people will feel when they learn about it, right?

But whatever this is, it's not transparency. Transparency, to quote the Nonprofit Quarterly's late Rick Cohen, "means going beyond what is required by law. To reveal what the law requires is simply the law. To tell readers and constituents that they'll get the information when the legal document – the foundation's tax filing – is made available is a bit of a slap in the face and not in the spirit of transparency." ®

Wikimedia volunteers have re-elected James Heilman, an emergency room physician and widely respected Wikipedia volunteer, to the WMF board. Heilman was forced out of the board last year after calling for more transparency. At the time, Wales accused Heilman of talking "utter fucking bullshit". It seems the volunteer community disagreed.

Andreas Kolbe is a former co-editor-in-chief of Wikipedia’s community newspaper, The Signpost.