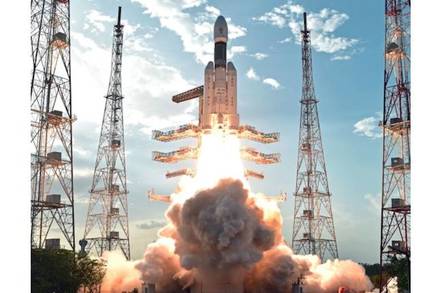 As we reported last week, the launcher represents India's entry into heavy rocketry: its GSLV Mark III is currently able to hoist four tonnes to a geosynchronous transfer orbit, or eight tonnes to low earth orbit.

The launch happened at 5:28 pm local time at the Satish Dhawan Space Centre, with the rocket lifting a high-throughput communications satellite as its first payload.

The satellite was released into its transfer orbit about 16 minutes after lift-off. Now under the control of the agency's Master Control Facility in the Karnataka city of Hassan.

Over the next few days, the satellite will be nudged from the transfer orbit into its geosynchronous slot, during which time its solar panels and antenna reflectors will be deployed.

India's rocket can't compete with the likes of SpaceX and NASA's planned Space Launch System. However if it can hit the 8,000kg mark it will be just 200kg behind Russia's Soyuz rockets and 2,000kg behind the European Space Agency's Ariane 5. Both of those rockets have years of reliable operations behind them, making them attractive launch options.

India's schtick is doing things for pleasing prices and at speed, which may give it a way in to the space business. India also plans its own satnav systems and earth observation tools, plus scientific missions to follow its Mars orbiter. The GSLV Mark III will therefore be welcome to satisfy domestic demands even if it doesn't win business from abroad. ®