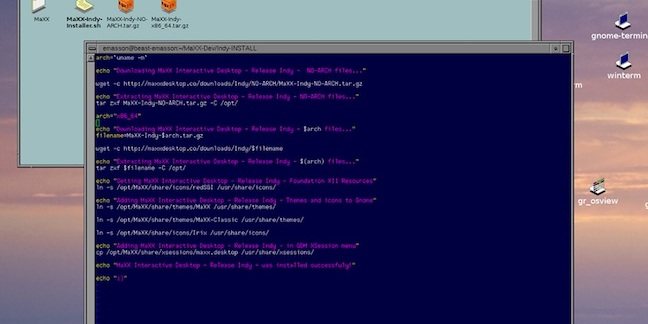 Maxx Desktop in all its retro glory

Those of you yearning for the experience of running a 1990s-vintage graphics workstation are about to have a good day: a developer named Eric Masson has resurrected the IRIX Interactive Desktop that shipped on Silicon Graphics Workstations and now offers it as a Linux desktop alternative.

SGI did okay for a while but proprietary workstations became an oddity once Windows came along and Microsoft encouraged makers of graphics-centric apps to bring their wares to Win32. SGI added a Wintel workstation line, but then had to compete with PCs-at-scale outfits like Compaq and Dell. The company kept making MIPS-powered workstation well into the 2000s, but eventually succumbed.

The new release is designed to run with 64-bit Fedora 25, but the effort's Facebook page features a few success stories on other Linuxes, and support for other distributions is on Masson's to-do list.

He isn't doing this just for the sake of nostalgia. He's created an SDK built on Eclipse, promises “CPU affinity, low memory foot-print, modern GUI and Enterprise class reliability” and is even offering a supported “Professional Edition”. A community edition is offered for dabblers. Sadly the Maxx Desktop's site was down at the time of writing, so we can't offer a download link or pricing. If that changes, we'll update this story. ®