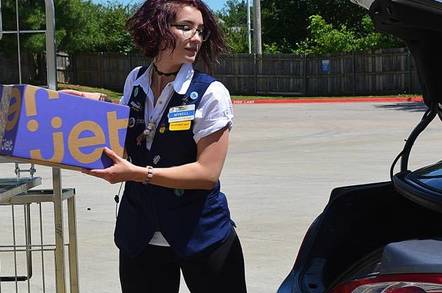 The global retail giant has launched a program to enlist its employees to deliver packages on the way to and from their jobs at the company's stores. Participation in the program, Walmart insists, is voluntary.

Marc Lore, president and CEO of Walmart eCommerce in the US, says the program will cut shipping costs and get packages to customers faster.

Walmart's 4,700 stores in the US are within 10 miles of 90 per cent of the US population. And with more than a million workers moving between their homes and Walmart stores, commuting routes might need only minor adjustments to bring packages to customers.

The Bentonville, Arkansas-based behemoth is pilot-testing its package delivery scheme in three locations, two in New Jersey and one in northwest Arkansas. Participating employees get an app for that, and extra pay.

Lore suggests that Walmart's approach, having goods and drivers start in the same location, is superior to crowdsourced delivery, where drivers have to travel to pick up packages.

That overlooks the fact that Walmart trucks still have to transport goods to a store with an employee-driver.

Nonetheless, Uber's struggle to make delivery profitable – the company has shut down UberRush and UberEssentials – suggests there may be a better way.

If Walmart can make it work, the company might be able to use its physical presence to raise its online fulfillment game – perhaps even at Amazon's expense.

"We already have trucks moving orders from fulfillment centers to stores for pickup," Lore explained in a blog post. "Those same trucks could be used to bring ship-to-home orders to a store close to their final destination, where a participating associate can sign up to deliver them to the customer's house. The best part is this gives our own associates a way to earn extra income on their existing drive home."

Walmart workers have been seeking extra income from the company, known for its low pay and resistance to unionization, for many years. Last year, Walmart committed to paying employees hired before 2016 at least $10 an hour.

At the company's recent shareholder meeting, there were again calls for higher wages, predictable schedules, and better benefits, according to The Washington Post.

In an email to The Register, Cynthia Murray – who heads Organization United for Respect (OUR), a group that advocates for Walmart workers, and is an active Walmart associate based in Laurel, Maryland – acknowledged that the opportunity to earn additional income would be welcomed by some, but expressed concern about compensation details.

"While many Walmart associates are struggling to get enough hours to make ends meet, this opportunity for additional hours could be a win for some associates," said Murray. "But without understanding if associates are going to be compensated for gas, additional insurance costs, wear and tear on our cars and the potential risks of delivering packages, then this program could be creating problems for associates."

Murray added, "Technology is changing the nature of work in retail and we understand that. And while Walmart continues to point to its 1.5 million associates as its advantage over companies like Amazon, we also know that they are not doing enough to support us and our families."

Walmart did not respond to a request for further details on the program. ®