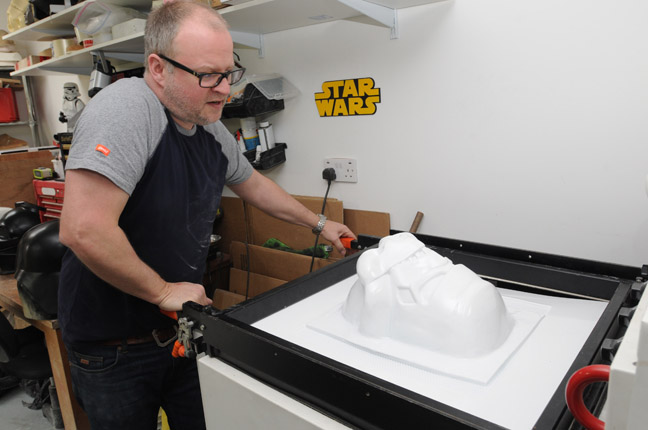 Edwards the artisan: Pressing up to 15 suits a year with a family connection. Photo by Gavin Clarke

A CfO suit will set you back £1,200 with Edwards making 10 to 15 sets a year. He does the moulding and assembling and a colleague working remotely in Huddersfield does the resin work. "My part [of the market] is quite small – it's more the artisan side of it," he admits.

He owes everything to Oakley, who by coincidence wanted to rather suddenly unload that set of female fiberglass moulds he acquired as he was getting married. Edwards paid £4,000 for the set and spent a month reverse engineering Oakley's moulds, females, turning them into make moulds suitable for vacuum forming ABS.

"The essence of the armour is the same as when it came out of the first moulds," Edwards says.

Despite the huge demand and potential prices, this remains a cottage industry. One reason is simple competitive pressure. Suits from plants in China and elsewhere sold under licence range from £50 to just under £1,000. But you ain't getting into the 501st wearing one of them.

"This, for us, wasn't a business – this was a hobby that grew and grew. To this day we run it as a hobby. The day it's not fun, I won't do it," McCormick says.

"We don't sit down with a spreadsheet and think what direction do we want to go in. We think, 'What are the props we want?' That's what fuels it all and that's why we have grown." McCormick has 10 staff and a growing film and TV props business. It pays his bills.

For Edwards, who worked on Attack of the Clones and non-Star Wars films at Aztec Studios, this is more personal. He majors on being a trusted and reliable supplier. He started making in 2009 after paying $2,500 for a poor quality set that took two and a half years to arrive.

"I went out on a mission to put this guy out of business by being better than him – he's stopped now," Edwards says. "I was fed up with the way armour makers would have this hold over fans. That doesn't ring true with me – I've tried to change the face of that by being open and transparent."

Edwards is also responsible for doing what we in tech might call open-sourcing the design of the stormtrooper uniform. He published a CD crammed with 500 photos detailing the stormtrooper uniform that changed hands between prop manufacturers for £500 a pop. This came to light during the Ainsworth case. The photos revealed minute details, such as the strapping – details you could only know if you owned one of the rare original suits.

Edwards reckons the established vendors had exercised a chokehold – something he took exception to.

"Everybody used to sanitise their props so nobody got a good cast of an original," he says. "They said it was for 'prop preservation', but I think it was to make money because next year they could release version one, then version two, then version three [of a suit] with little details added back into them. I got hold of them [the photos] and put them online and suddenly everybody could see what was contained in an original prop. I got lots of hate mail from lots of vendors around the world. But I believe it made the standard higher." 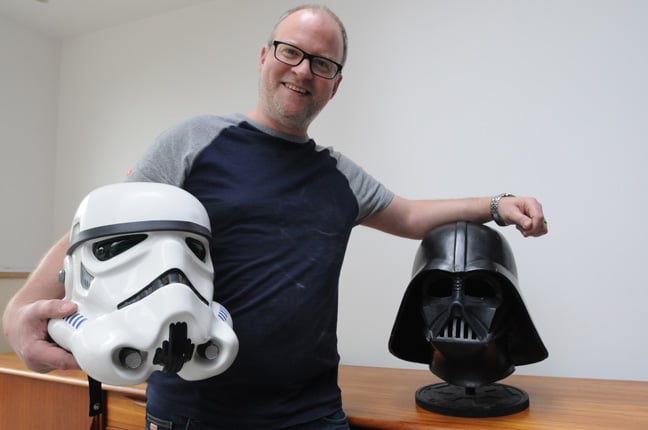 Edwards with an Empire MK II stormtrooper and Vader – a mix of Jedi dome and New Hope face plate. Photo by Gavin Clarke

Ainsworth started selling to the public following a bit of speculative curiosity. Following a 30-year hiatus he decided to test the waters with a helmet at auction in early 2000. It fetched £60,000. "The phone didn't stop ringing with people who wanted to go into partnership with us," Ainsworth says.

Remarkable as this may seem, Star Wars nerds, your beloved films haven't always been a cultural tour de force. An effort to punt helmets for £11 a pop by Ainsworth in 1980 fell flat. "We thought we'd have a go, and I made some helmets and stood on the railings at Green Park and I was trying to sell them for £11 each. I didn't sell one. So we moved on to Camden Lock and still didn't sell one. So we gave up."

But three decades, some cinematic remasters and a Phantom Menace later, Star Wars had become a sensation and Ainsworth was selling to the public. Selling so much Imperial and Rebel gear (British court documents claim between $8,000 and $30,000) that he came to the attention of Lucasfilm.

Ainsworth was ordered to pay $20m by a US court but because he lacked any US assets the ruling couldn't be enforced. Lucasfilm turned to the British courts with the case winding through the High Court, Court of Appeal and Supreme Court between 2008 and 2011.

Lucasfilm claimed the helmet was protected under 1988 UK copyright law as it had been made in clay and was therefore "a work of art". The courts, however, agreed with Ainsworth's argument that it was a model designed to serve production, something that received a smaller window of protection – just 25 years under British law.

It was a landmark: Ainsworth couldn't sell in the US but elsewhere was fair game and it gave others air cover. "I'm pretty sure Lucasfilm and Disney know about me – they hang about in the forums and Facebook," says CfO's Edwards.

"I don't think I sell enough for them to worry about – it's something I do in my spare time and a few days a week. And I do it because I enjoy it. If people want a good quality product, then they know where to come."

McCormick agrees. "We are fanboys first and foremost. Because of how we operate, our ethic, they are not interested in us – we are small potatoes. Our stuff is a very niche market, for the people who like them like they were on set."

That said, McCormick thinks time's running out on stormtroopers. Not because of the passing of time, but because of Disney's saturating hype. "We anticipate [demand] will start dying down soon. When we started we were getting into the whole scene – there was a nostalgia and it was iconic and part of pop culture – but now because of the new movies they are absolutely ramming Star Wars down people's throats. We will lose that nostalgia thing and it will become hated." 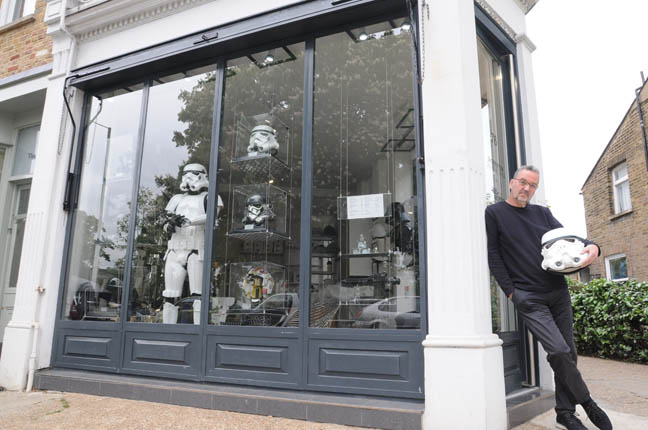 No new force? Ainsworth's leaving the new films to a new generation. Photo by Gavin Clarke

What about making the troopers of The Force Awakens?

Nobody is interested. "No, I wouldn't bother with that, that's somebody else's to take on – let them have it," says Ainsworth.

Edwards is a little more expansive. "I don't like them – I think they look like ducks," Edwards says. "They just don't have the same look of the old stormtroopers, they all look chunky and overweight and squat. The original stormtroopers were lean, tall and quite menacing."

He's also looking to spin up a line in Vader helmets – the first time a cast from the original mould will have been offered to the public, he says. He's also got the beginnings of a C-3PO helmet at home. "I've got lots of work to do. I might ramp it up but I like doing it on my own, having that personal touch, everything has my quality stamp on it before it goes out."

He is right to mine the New Hope vein. When I've mentioned this article to people in passing, and the 40th anniversary, it's invariably drawn the same response: "I want one of those suits." These people have been men, invariably. Aged, invariably, 30 to 40. Ish. ®