How the Facebook money funnel is shaping British elections 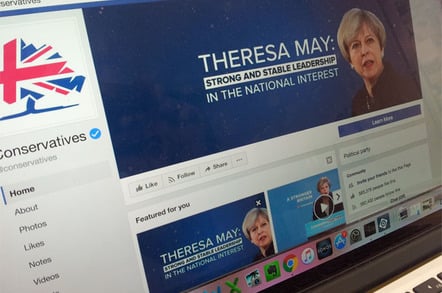 Britons vote for a new government on June 8 and, until recently, election campaigns have been tightly controlled affairs with limits on how much parties can spend per constituency, the requirement to submit detailed accounts and no political advertising on television.

But the rules don't cover online advertising – allowing Facebook to cash in, having used the Conservative Party's 2015 victory as a case study. The Electoral Commission, which exists to regulate elections, estimates that in the 2015 general election more than 99 per cent of spending on social media was with Facebook, with the Conservatives splashing out £1.21m, Labour £160,000, Ukip £91,000, the Liberal Democrats £22,245, the Green party £20,000 and the Scottish National party £5,466.

The commission admits these are estimates based on invoices and receipts and more could have gone through third parties. In 2015 parties and candidates were not required to categorise spending with social media companies and while the commission has already proposed this should change, the 2017 general election is taking place under the same rules.

"We are continually developing our understanding in this area, including through live monitoring of activity," it said in a statement. "We will report after the election on campaign spending, and on what changes to the regulatory regime may need to be made for future polls."

That means the UK's 2017 general election is being fought partly through targeted online advertising with little oversight of what is taking place. "Political TV advertising is illegal in Britain, but showing people videos when they're online through paid advertising is entirely legal," says Rob Blackie, a digital strategist who has worked for Blue State Digital and Ogilvy.

"You have the advantages you get of a TV ad, the emotional engagement of a video, but you can target it by constituency or by types of voters." He is working on this election for an unnamed client and volunteering for the Liberal Democrat party.

Carl Miller, research director at think-tank Demos, says targeted online adverts are leading to two things. "The first effect will be this massive splintering of message," where people will see ads tailored to their locations or other personal data.

"The other big effect is it will be a lot rawer and less controlled. I think you'll see a lot more attack ads, more negative campaigning." One Conservative Facebook advert shows a very brief clip of Labour leader Jeremy Corbyn calling to close down NATO and another praising Costa Rica for abolishing its army.

British general elections are won and lost in small numbers of marginal constituencies, roughly equivalent to US swing states. Candidates are limited to spending roughly £15,000 on their campaigns (depending on the number of voters and the type of constituency), including online advertising. But Professor Helen Margetts, director of the Oxford Internet Institute at Oxford University, says it's unclear whether online ads targeted at a specific constituency gets declared there or as part of parties' much larger national budgets. "Regulation hasn't kept up with the technology," she says.

Then there's the question of targeting voters by other measures, such as the psychometric data allegedly used by Donald Trump's US presidential campaign. Information Commissioner Elizabeth Denham has opened an inquiry into political use of data analytics.

But Blackie reckons parties are using location more than anything else in this election. "Because it's happened so quickly, the level of targeting we're seeing is not that sophisticated so far. The Conservative stuff is very broad, their standard 'strong and stable' messaging about Theresa May." He adds that Labour is doing more on specific policies and local MPs – although this reflects the supposed unpopularity of its leader Jeremy Corbyn.

However, as Facebook boasts in its case study in 2015, the Conservatives targeted adverts with data from marketing company Acxiom, which covers data including income and attitudes. If they use this again, "the Conservatives are probably going to play a slightly more liberal message to middle-aged professionals," Blackie says, with pensioners and those who have previously voted Labour getting more Europe-bashing.

Some are trying to drag the content of targeted ads into the light. Campaigners have set up Who Targets Me, a Chrome browser extension that automatically records political Facebook adverts. Blackie has used the initial data from Who Targets Me to estimate that the parties are already spending at least £140,000 a week through Facebook. The Guardian and Sky News are asking people to send in screenshots of ads.

But there is a problem with voluntary monitoring: it only covers ads shown to volunteers. "That will include a certain kind person, more concerned about privacy, more concerned about big data in politics," as well as being younger and more likely to use social media, says Miller. "It's typically a concern of the left and centre-left." Blackie says that just 10 per cent of ads picked up by Who Targets Me are from the Conservatives; Labour is reportedly aiming to match Conservative spending online in 2017, but it seems unlikely it is greatly outspending it.

Why should transparency end at the internet?

So what should happen? Margetts says the Electoral Commission should insist parties collect and publish detailed financial records for online spending, as it does for real-world campaigning. "There's got to be a tooling-up of bodies like the Electoral Commission. They've got to realise this is where the election gets played out." Referring to a recent commission investigation of Conservative campaign spending on travel expenses, she adds: "If you're getting to the level in the physical world of hotels and buses, then why can't you do that for what kind of bill they get from Facebook?"

Blackie believes that Facebook and Google should volunteer or be forced to publish every advert they run from a political party or campaign group registered with the Electoral Commission. "Facebook and the Electoral Commission both know what entity is doing that advertising." Ideally they would also publish the targeting and spending for each ad. The Register put these proposals to Facebook and Google; neither had replied by press time.

However, the Conservative party, which looks the favourite although one YouGov poll has shown a tightening in the wake of a number of slips by the party, has pledged in its manifesto to regulate social media platforms such as through a right to delete material posted by under-18s, and also plans to improve the election process including voter identification and a commitment to retain "the traditional method of voting by pencil and paper".

While the Conservative manifesto does not cover online election advertising specifically, its tone on related areas suggests that although it may use Facebook to help it win this election, it is likely to try to stop anyone doing likewise in future. ®