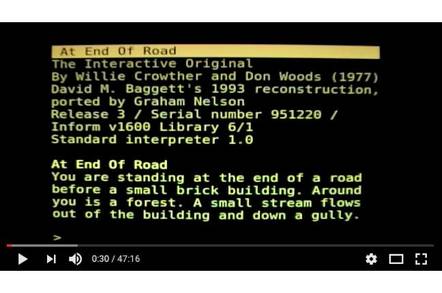 The classics never die – or so we hope. One classic, Colossal Cave Adventure, is getting a new lease of life on GitLab.

Regarded the first text adventure game, Colossal Cave Adventure was first given life in the 1970s on a Digital PDP-10, by ARPANET pioneer William Crowther, and expanded on by Don Woods, then a Stanford student.

You are standing at the end of a road before a small brick building. Around you is a forest. A small stream flows out of the building and down a gully.

At GitLab, Raymond explains what he's posted is a forward-port of “he Crowther/Woods Adventure 2.5 from 1995, last version in the main line of Colossal Cave Adventure development written by the original authors.”

He explains: “This project is called 'Open Adventure' because it's not at all clear how to number Adventure past 2.5 without misleading or causing collisions or both. See the history file for discussion. The original 6-character name on the PDP-10 has been reverted to for the executable in order to avoid a collision with the BSD games port of the ancestral 1977 version.”

Calling the game “one of the hallowed artifacts of hacker folklore”, Raymond provides a history of the game here.

Crowther, he explains, first wrote the game as a maze; it was Woods who added the Dungeons and Dragons elements that were expanded on in later forks of the game.

“The history of these non-mainline versions is complex and murky. Functional differences were generally marked by changes in the maximum score as people added puzzles and rooms; however, multiple ports of some versions existed - some in FORTRAN, some in C, some in other languages - so the maximum point score is not completely disambiguating.”

Below is a walk-through of one of the many old ports of the game. ®