The revolution will not be televised: How Lucas modernised audio in film 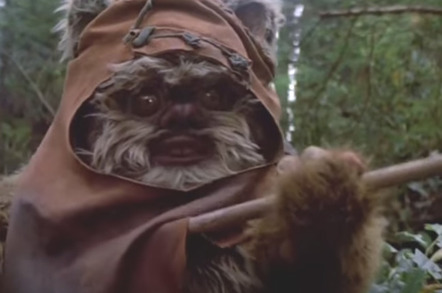 Star Wars New Hope @ 40 The opening sequence of Star Wars is designed to give you a jolt. It's heightened by those moments after the legend "A long time ago in a galaxy far, far away..." has faded, leaving you sitting in a silent, pitch-black cinema auditorium.

Then kapow – without warning you are blinded by the iconic logo at full screen and made to jump at a very sudden and extremely noisy trumpet fanfare, immediately followed by a wall of sound produced by a full orchestra launching into one of the most recognisable themes ever written.

However, older readers who queued up to see the initial performances at their local cinema in 1977 may remember it differently.

"A long time ago..." fades away not to silence but to the hum of the cinema air conditioning, the rumble of a bus driving past and the laughter of a latecomer ordering popcorn in the lobby.

Then the Star Wars logo appears as an almost illegible glow as the projectionist continues to fiddle with the focus ring, accompanied by muffled sequence of squeaks, the epic orchestral fanfare rendered to something akin to five vuvuzelas played from inside a lead-lined coffin.

Certainly, comparing the muffled, grubby movie theatre experience of the 1970s with that of the crisp provincial multiplexes of today, it does seem a long time ago in a galaxy far, far away. And Star Wars itself was the catalyst for change.

Like every good director, George Lucas understood not just the importance of quality visuals but the power of audio as key to cinematic story telling. As well as the obvious – dialogue, mood music, compression of distracting ambient noise and so on – a crafted soundscape completes the immersive theatre experience by fooling the brain into seeing what isn't actually shown.

Lucas took considerable pains to ensure the audio track for Star Wars would be every bit as impressive as its rather more celebrated on-screen special effects. To this end, he adopted the recently introduced Dolby Stereo system, which despite its name employed optical four-channel surround sound technology with, of course, noise reduction.

The huge success of Star Wars with the public fired a renewed interest in surround sound, previously dismissed as an expensive indulgence, and gave the movie industry the kick it needed to encourage theatres to upgrade their performance equipment. It was a significant break with cinema tradition still adhering to audio technology essentially unchanged since the early days of the talkies.

Back in 1938, the Academy of Motion Picture Arts and Sciences standardised a method of transcribing a film's audio to an optical track on a narrow space to the side of the picture frame on the reels. It also determined an audio curve that would compensate for the generally poor quality of loudspeakers in many theatres, and minimise playback hiss, essentially by clipping the treble and greatly reducing the bass.

Despite novelty one-offs such as Disney's Fantasia in 1940, which employed a proprietary method of transcribing and playing multitrack surround sound, little changed in cinema audio technology for the next 40 years.

The TV boom of the 1950s saw several attempts by movie companies to boost the cinema experience with bigger film formats and bigger sound. The 70mm format, for example, made it possible to fit four channels of magnetic audio on the film strip, as with 1953's Biblical epic The Robe, or even six tracks (five in front, one surround) for Oklahoma two years later.

However, the magnetic tracks did not wear well over time and 70mm format was expensive to produce while also severely limiting the range of theatres capable of using it.

Then the end of the 1960s, Dolby looked at bringing its noise reduction system to the movie industry: Dolby A-Type was first heard in the soundtrack for 1971's A Clockwork Orange. The company also pioneered the idea of making it possible for movie theatres to calibrate audio playback to suit the specific venue it's played in. Gradually, the Academy's old clipped audio curve was replaced by the "extended range curve" – the X-Curve – which compensates for key issues such as reverberation, taking into account perceived spectral response in different room sizes.

For Star Wars, Dolby ran two optical channels for stereo left and right down the Academy’s optical mono track on otherwise standard 35mm reels and coded into these additional centre and surround channels. These were decoded during playback in the cinema as three screen channels plus one surround channel, all at a fraction of the cost of the magnetic 70mm systems.

This put stereo and surround sound within reach of smaller cinemas. Star Wars had given long-suffering cinema-goers a taste of surround sound and now they wanted more.

George Lucas knew he had tapped into something but by the time he had wrapped up the first Star Wars sequel, he was seriously questioning whether audiences were getting the full benefit of the work that his audio engineers were putting in to the soundtrack. He wondered whether the real challenge for bringing surround sound to the masses was in getting cinemas to understand how to use it properly.

Time to bring in the boffins

When The Empire Strikes Back debuted in May 1980, he hired audio scientist Tomlinson Holman to analyse the whole sound engineering process from film set recording to cinema performance. As Lucas suspected, but to Holman's horror, the latter found that cinema theatres everywhere suffered from low quality sound systems and poor acoustics, not to mention badly illuminated screens and acute viewing angles.

Holman's initial response was to establish custom audio mixing studios, later known as Skywalker Sound, and work with Lucas on a means of persuading cinemas to update their equipment and adopt systems of good practice in theatre performance.

The result was an audio quality assurance project under the brand THX, first unveiled to and experienced by cinema audiences with Return of the Jedi in 1983.

While it is sometimes hinted that the "THX" name is derived from Holman's initials (plus an "X" because it looks cool) sci-fi movie buffs will be aware that THX is an obvious reference to Lucas's first film, THX 1138, a soporific low-budget cult dystopian slow-burner from 1971.

THX 1138 is the protagonist's name, played by Robert Duval. His girlfriend pronounces it "Tex". Now you know.

Another misconception is that THX is an original audio technology. In fact, it is a certification programme.

A cinema chain, for example, might pay a fee to invite a team of THX experts to analyse the existing theatre setup and make recommendations about everything from projection and audio equipment to soundproofing, room shape and seating arrangements. If the cinema complies, it can advertise itself as THX-certified and audiences will know they can expect a quality performance.

Indeed, the various THX pre-performance cinema logos in THX-certified theatres have occasionally became as famous as the films that followed them. Accompanied by an electronic resonant chord known as Deep Note, these little logo sequences have acquired their own fan base over the years, sometimes extending to mini shorts featuring animated characters, even parodied – with official sanction – by Animaniacs, The Simpsons, and classic LucasArts adventure game The Curse of Monkey Island, for obvious reasons.

The impact of THX quality standards on the cinema industry should not be underestimated. While technology companies such as Dolby continued to innovate throughout the 1970s and 1980s – introducing Dolby Stereo Spectral Recording (SR) with 1987's RoboCop and Dolby Digital for 1992's Batman Returns – THX played a huge part in cinema's survival, and indeed revival, in the face of rising competition from home video.

How could a sparkly VHS rental movie with scratchy audio compete with the high quality visuals and immersive surround sound of a THX-guaranteed movie experience in the theatre?

THX decided to sort this out too and entered the consumer electronics market as early as 1988, introducing new audio reproduction processes such as Re-EQ, a filter that addressed the problem of home cinema audio sounding too bright when interpreting the X-Curve.

The company was acquired by Creative Technology in 2002, expanding its reach into home computing. The first THX-certified audio card was the Sound Blaster Audigy 2. And it wasn't long before the THX logo could be found on all manner of home AV products, including DVDs and Blu-Ray, as a quality assurance brand for both image and audio.

Dolby was back in 1999 with Digital Surround EX, adding a rear surround channel within a 6.1 setup, first employed by Lucas for The Phantom Menace. And so it continued into the 21st century, with ever-improving digital surround sound systems expected by movie-goers as a minimum requirement for all but the dodgiest backstreet cinema.

By raising the levels of expectation from cinema and home electronics, George Lucas's little audio spin-off project arguably inspired a movement to improve audio performance quality generally. The improvement in room acoustics and backtracking in traditional stage theatres over the last 15 years, not to mention enhanced performance hall amplification and live band speaker rigs, possibly all owe a nod to the surround sound groundswell that began with Star Wars.

Today, of course, it's all about the small screen. THX is now owned by gaming hardware company Razer, so its influence is not going away. The Star Wars legacy endures. ®