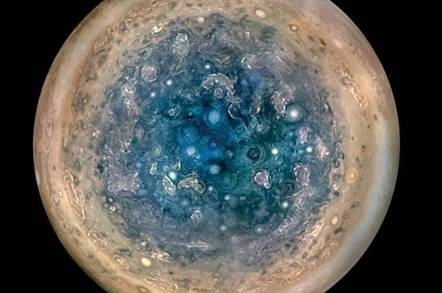 My god, it's full of storms!

Scientists were expecting a lot of new data from the Juno space probe orbiting Jupiter, and they haven't been disappointed. The most massive planet in the Solar System is turning out to have a lot of surprises.

In a press conference on Thursday, NASA engineers and astrophysicists detailed the first science results from the slightly broken probe that began orbiting the gas giant last July. The probe has revealed vast earth-sized cyclones at the planet's poles, a very odd magnetic field and a complex atmosphere that is going to take years to understand.

"We knew, going in, that Jupiter would throw us some curves," said Scott Bolton, Juno principal investigator from the Southwest Research Institute in San Antonio, Texas.

"But now that we are here we are finding that Jupiter can throw the heat, as well as knuckleballs and sliders. There is so much going on here that we didn't expect that we have had to take a step back and begin to rethink this as a whole new Jupiter."

After the failure of its main engine, NASA decided to put Juno into a long orbit over Jupiter, which will allow it to collect similar data to that which was first planned with a flyby every 53 days, although it may take a little longer to do so. Juno swoops to about 2,600 miles (4,200 kilometers) from the top of Jupiter's atmosphere and sends back around 6MB of data with each pass.

Now, in two papers in the journal Science and 44 in Geophysical Research Letters, the data from the first passes has been analyzed and published. The researchers found a variety of unusual aspects to the planet, starting with the poles and the massive storms that reside there.

"We're puzzled as to how they could be formed, how stable the configuration is, and why Jupiter's north pole doesn't look like the south pole," said Bolton.

"We're questioning whether this is a dynamic system, and are we seeing just one stage, and over the next year, we're going to watch it disappear? Or is this a stable configuration and these storms are circulating around one another?"

Juno is also carrying instruments to measure Jupiter's magnetic field, which we already knew was the strongest in the solar system. But Juno has shown it's bigger than first supposed and measured 7.766 Gauss, about 10 times stronger than the strongest magnetic field on Earth.

"Already we see that the magnetic field looks lumpy: it is stronger in some places and weaker in others," said Jack Connerney, Juno deputy principal investigator and the lead for the mission's magnetic field investigation at NASA's Goddard Space Flight Center.

"This uneven distribution suggests that the field might be generated by dynamo action closer to the surface, above the layer of metallic hydrogen. Every flyby we execute gets us closer to determining where and how Jupiter's dynamo works."

The probe also showed that the Jovian atmosphere doesn't just consist of belts of clouds high over the surface of the planet. The central equatorial band of weather dives deep into the atmosphere, as far down as we can see, and the atmosphere creates its own soundtrack.

"Every 53 days, we go screaming by Jupiter, get doused by a fire hose of Jovian science, and there is always something new," said Bolton.

"On our next flyby on July 11, we will fly directly over one of the most iconic features in the entire solar system – one that every school kid knows – Jupiter's Great Red Spot. If anybody is going to get to the bottom of what is going on below those mammoth swirling crimson cloud tops, it's Juno and her cloud-piercing science instruments." ®