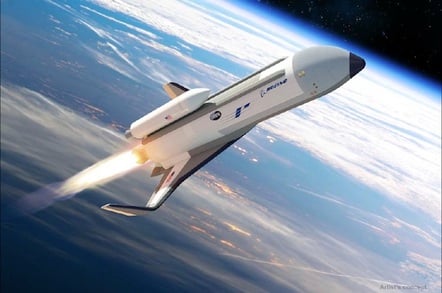 Artist's impression of the XS-1 spaceplane

The United States Defense Advanced Research Projects Agency has commissioned Boeing to build a spaceplane capable of 10 launches in 10 days.

The Experimental Spaceplane (XS-1) program is designed to give the US the ability to launch stuff fast, in order to “revolutionize the Nation’s ability to recover from a catastrophic loss of military or commercial satellites, upon which the Nation today is critically dependent.”

The XS-1 design selected by DARPA will see Boeing construct a spaceplane “roughly the size of a business jet”. The vehicle will take off like a rocket using the Aerojet Rocketdyne AR-22 engine, thruster derived from the Space Shuttle's main engine. The AR-22 is designed to offer 500,000 lbf of thrust.

Once the AR-22 gets the XS-1 to “high suborbital altitude” a rocket that piggybacks the spaceplane will take over and carry a “deploy a 3,000-pound satellite to polar orbit.” The rocket won't be used again, but the XS-1 will land like a conventional aircraft and be ready for another launch “potentially within hours.”

The XS-1 will be hypersonic, thanks to what Boeing calls “third-generation thermal protection” that can take the heat of faster-than-sound flight.

Boeing won the gig after convincing DARPA it has the tech and know-how to build planes that can take a beating and still turn around fast. The plan is for “easily accessible subsystem components” to be used, so that new bits can be swapped in quickly and easily, while the XS-1 is expected to use “Hybrid composite-metallic wings and control surfaces” which sounds rather like the kind of stuff Boeing packs into both military and civilian aircraft. And of course its mysterious X-37B spaceplane.

DARPA's given the XS-1 a tight schedule. By 2019 it's hoped the vehicle's engines can be tested ten times in ten days. First flights have been scheduled for 2020, with 12-15 tests expected including ten on ten consecutive days. The first few flights would be shakedowns, but then tests would require payload-free operation at up to Mach 5. The last flights in the series would fly at up to Mach 10 “and deliver a demonstration payload between 900 pounds and 3,000 pounds into low Earth orbit.”

If it all goes well, at the end of the tests the US will possess a platform capable of launching satellites at US$5m a pop. That's nicely priced given that at the small end of the space business Vector Space Systems thinks it can launch 60kg (130 pounds) for $1.5m and SpaceX's $62m base price can buy you 50,265 pounds of freight in low earth orbit or 18,300 pounds in geosynchronous transfer orbit. ®