Lander exercise was 'very close' to a success 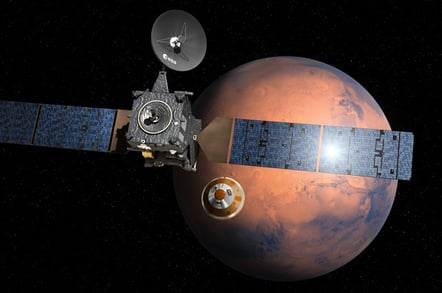 The Schiaparelli probe suffered a botched landing on the Martian surface as it briefly spun out of control, confusing the computer systems onboard, an official report concluded today.

As the parachute was deployed, the lander rotated at a faster acceleration than expected. It caused the “Guidance Navigation and Control” component to incorrectly estimate the angle of the probe, causing the software to register it as a “negative altitude” – or, below ground level.

“There was no check on board of the plausibility of this altitude calculation,” the report said. This confirms the European Space Agency’s (ESA’s) previous suspicions that the Inertial Measurement Unit, which measures the rotation rates of the probe, was “saturated,” surpassing the maximum possible measurement.

Schiaparelli immediately entered “terminal descent” mode, and fired its backshell and parachute prematurely, causing it to plummet when it was about 3.7km from the ground. It slammed into Mars at a velocity of about 150 metres/s. The impact shattered the spacecraft and left a gaping hole measuring 15 by 40 metres across on the dusty surface of Mars.

Schiaparelli was part of the ExoMars mission, a joint programme between ESA and the Russian space agency Roscosmos, to hunt for evidence of life on the Red Planet. Last March, the lander was launched together with the ExoMars Trace Gas Orbiter.

On 16 October 2016, the probe separated from its mothership to make its way down to Mars. Three days later, after the failed landing, communications between the ESA team and Schiaparelli were lost.

The four main root causes of failure identified in the report include:

Several recommendations have been made – from updating onboard software so the design is more robust, to considering partnering up with universities or other agencies such as NASA Jet Propulsion Laboratory that have managed to successfully land rovers on Mars to strengthen the project.

The Schiaparelli probe was an experiment to test the landing process on Mars. Despite faults, the ExoMars mission is still ploughing ahead as scientists narrow down on two sites for landing a rover in 2020.

There is reason to be hopeful as the independent report concluded that “the Schiaparelli demonstrator was very close to [landing] successfully on Mars at the planned location”. ®